The University during the Franco Regime

Shortly before the end of the Spanish Civil War, Pio Zabala was appointed as the first Rector of the dictatorship. Zabala was responsible for undertaking the new university system.  The exile and purging of faculty members caused a significant decrease in the number of members in the Academic Senate. Around 40 per cent of the faculty members were affected. The last three rectors under the Republic (José Giral, Fernando de los Ríos and José Gaos) died in exile. 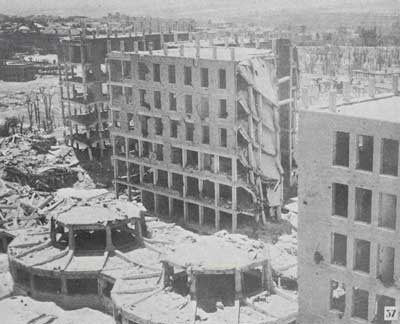 In 1943, The Spanish University Planning Act (Ley de Ordenación de la Universidad Española), which was valid until 1970, drew up a plan for the University under Franco. This plan confirmed the centralised structure of the Spanish university (PhD degrees were awarded exclusively in Madrid until 1954) and the Rector was appointed as the highest authority of the university by the Government and also played a broader and more significant role. In addition, the Church was directly involved in higher education (religion was included in the study programmes), as was the army (in charge of physical education) and the Falange (responsible for the compulsory affiliation of students and faculty to the Spanish Students' Union (SEU) and Spanish Faculty Service (Servicio Español del Profesorado Universitario) respectively).

Pedro Laín Entralgo was the Rector in Madrid between 1951 and 1956. The rigid supervision of academic life was slightly reduced at this time. Laín Entralgo authorised a University Conference of Writers in 1956, at which a manifesto written by Javier Pradera, Enrique Múgica and Ramón Tamames, among others, was presented. The manifesto threatened to break with the SEU. The rising tension led to student demonstrations for the first time since the Spanish Civil War. Demonstrations took place not only on the University City campus but also on Calle San Bernardo and Calle Alberto Aguilera where the events reached the highest levels of violence. Because of the riots the university was shut down, Laín Entralgo resigned and Franco dismissed the Minister of Education Joaquín Ruiz Giménez.

Under Lain’s governance, the first schools were established in order to offer classes not included in other Faculties. These schools would eventually turn into new Faculties, such as the School of Statistics (1952) and the School of Psychology and Psycho Techniques (1953). 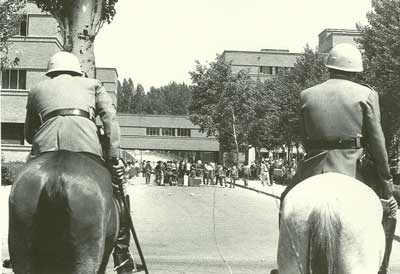 The change of Rector and Minister of Education constituted a new stage in Spanish education. Budget crises struck education in the first period of the Franco regime and students opted for new ways of social and political participation. The SEU became less popular and ended up disappearing in 1965 when the Minister Manuel Lora Tamayo realised it could no longer control the protest movement.

The student problem was treated as a matter of public order and had clear support from academic authorities. The same heavy measures were used to control dissident professors. A clear example of this was the dismissal of the Madrid professors López Aranguren and García Calvo and the Salamanca professor, Enrique Tierno Galván

In 1962, a different social and economic framework to that which emerged from the civil war led to an extensive renovation of the university. It required new categories of teachers, a more efficient academic organisation and better adaptation to the needs of the students. This resulted in the University being granted the status of autonomous body by the Ministry of Education in 1962. The Law of University Education came into force in 1965. This legislative framework included some higher education subjects, such as artistic studies, in the University City area. The principles that inspired this regulation were included in the General Law of Education of 1970 once the most reformist approaches reached the Ministry through Villar Palasí. Under this law, the University of Madrid became known as Universidad Complutense de Madrid (Complutense University of Madrid) and adopted its first effective statutes. 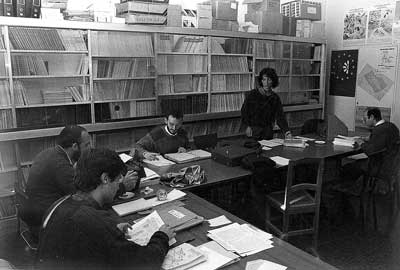 The University during the Democratic Transition and Consolidation »