The University in Alcalá de Henares 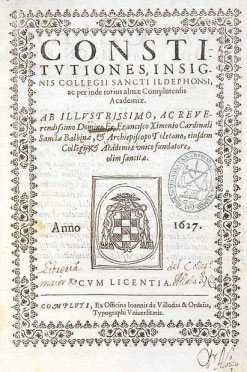 The current Complutense University of Madrid was founded by Cardinal Cisneros as a result of the “Inter cetera” Papal Bull granted by Pope Alexander VI on 13 April 1499. This Papal Bull provided the Cardinal with the power to found and construct a College of Scholars located in Alcalá de Henares. The three documents that come from the pontifical chancery date back to the same date. The “Inter cetera” document belongs to the category of papal bull, so it is not a bull or “littera solemne”, but a “littera graciosa” or grant letter. It is a piece of parchment with semi-gothic lettering that is conserved in the National Historical Archive.

Cisneros ordered the construction of the San Ildefonso College one month before being granted the Papal Bull, laying the first stone in March 1499. The idea was to create the Complutense College to give classes in Theology, Canon Law and Liberal Arts. The papal bull granted authorisation for this—”a College of students where they take classes in the Faculties of Theology, Canon Law and Art”.

The College has been located on the site of the ancient Roman city from the 1st century BCE, Complutum. Construction finished in 1508, and students started studying here in the same year. Registration occurred between August and October. On 17 October, the first Rector of the University was chosen, Pedro del Campo. He opened the academic year with a lecture about the moral philosophy of Aristotles. Cisneros’ initial idea was to reproduce the content of studies from Medieval European universities, where Theology, Medicine and Jurisprudence were studied, with Liberal Arts as preparatory studies. Through the collegial structure, the Cardinal attempted to allow people with limited resources to study at the university by granting scholarships.

From 1502, and before the College was constructed, Cardinal Cisneros started collecting books to create the library and started working on a multilingual Bible.

In 1510, the Cardinal published the Constitution of the College of San Ildefonso. This expressed, with great attention to detail, the regulations for studying Art, as well as those for the Faculties of Theology, Canon Law and Medicine. He also noticed that they needed to establish other subjects such as Grammar and Greek (points 38 and 58 in the Constitution).

He noticed that studies of Medicine were not included in the papal bull or in the initial plans for the College of San Ildefonso. However, they were included in the Constitution of 1510 under point 49:

“Because of the large amount of illnesses that worry mortals every day, the study of Medicine is considered to be very appropriate and necessary for the Republic, experience and understanding. We therefore establish that our College will have two professors of medicine and two very knowledgeable doctors with plenty of experience.”

Upon establishing the Constitution and swearing before the Senate, the university community, or rather the University, came into being with its own legal personality and was led by a Rector, just like the College.

After several ups and downs at the University located in Alcalá, from the glorious moments of its foundation to a considerable decline in 1821, the General Regulations of Public Education ordered the creation of the Central University of Madrid, therefore eliminating the University located in Alcalá a year later. The Central University was established by Order on 3rd October 1822, covering the studies of the literary University in Alcalá, of San Isidoro and of the Natural Sciences Museum. But the return of absolutism in 1824 led to the University resorting back to its first location. The Institution was weakened by censorship, lack of status, the prohibition of academic dress and the lack of spaces in Madrid.

The University during the reign of Isabella II »