The Educational Textile Collection holds approximately 6000 pieces, including textiles, layettes, clothing, toys, accessories and photographs. It is basically a collection of lace and embroidery put together to show the different techniques employed in textile production.

The origins of this museum lie in “El Museo de Instrucción Primaria” created by Royal Decree of 6th May 1882. This museum was created as part of the activities of the “Institución Libre de Enseñanza” created in 1876 by Giner de los Ríos. It was later renamed “National Educational Museum”.

The most relevant manager was Don Manuel Bartolomé Cossio, from 1884 to 1935.

In 1941 (29th March) a Decree to close the National Educational Museum was published and all the items and objects of its collection were taken to the Instituto San José de Calasanz de Pedagogía educational institute, where Mrs Maravillas Segura Lacomba took over the lace and embroidery collections and a Spanish Embroidery Catalogue was published.

The collection was later on sent to the Faculty of Education (located in the Campus of Somosaguas) and catalogued by Mrs María Ángeles González Mena; the catalogue was then published. The collection is now at the Faculty of Library Sciences and it is preserved, whenever possible, by preventive conservation methods and textile restoration. 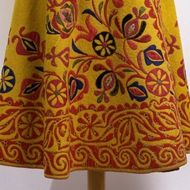