Initially designed to support teaching in the Department of Zoology, this collection brings together a wide range of anatomical specimens. The museum pursues three main objectives: first, it has a clear educational purpose; the museum also intends to serve as a reference point for systematic biomechanics and vertebrate ecomorphology studies; and finally, the museum is committed to increasing the awareness of ecological and environmental issues.

The most spectacular part of the collection contains more than 600 complete skeletons of animals, displayed so as to present a comparative view of the evolution of animal anatomy. Such collections are unusual because specimen conservation has traditionally favoured the preservation of only skins and skulls, or specimens in liquid preservatives.

Along with the skeleton collection, there are animals preserved intact (in liquid) or taxidermically (mammalian fur, feathers and fish scales), as well as several reproductions of anatomical parts.

The specimens shown in the permanent exhibition are clearly identified, including information about range, morphology, ecology, food and other peculiarities of a significant number of skeletons.

The material comes from two basic sources: donations from students, faculty and contributors; and specimens provided by public institutions (regions, ministries, etc.) and private institutions (zoos) . Thus this collection features items that stand out for their unusual or peculiar characteristics.

It is worth mentioning that practically all the museum material has been prepared for exhibition by students. The preparation, set-ups, arrangements and inventory were made by students of comparative anatomy studies, and have played a vital role in students" education.

The Museum is aimed at students of several faculties (Biology, Veterinary Science,  Medicine, Fine Arts, Archaeology), and also plays a social, educational and cultural role for the general public and students of primary and secondary education.

The origins of MACV date back to late nineteenth century, when the Chair of Vertebrates (former Chair of Chordates) acquired a modest collection of naturalized specimens, bones, skulls, skeletons and various anatomical preparations from Central European Suppliers for educational purposes.

In the 1970s, Dr. Francisco Bernis (1916-2003) became interested in the collection, which had deteriorated over time. The current museum was developed thanks to Dr. Bernis" interest and the contributions of faculty, students and departmental staff. The contributions of Professor Fernandez Cruz, who started to collect the students" works that constitute the present museum, are also worth mentioning. The museum is constantly enlarging its specimen collection, thus becoming one of the most important university museums in Europe.

In 2004 the Complutense University released a CD-ROM with a virtual tour of the Museum of Comparative Anatomy collection. 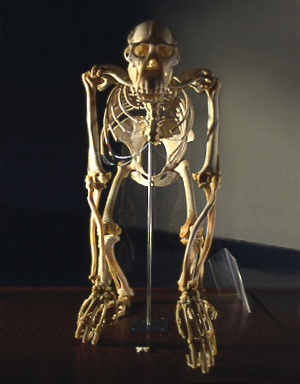