Sites contaminated by accidental or intentional spills of liquid phases containing toxic organic compounds such as hydrocarbons, chlorinated solvents, or pesticides are common problems in the environment. These leaks have led to hundreds of local soil and groundwater contamination hotspots, posing a risk to human health and the environment. Many of these discharges are hydrophobic, forming non-aqueous liquid phases (NAPL), some lighter than water (LNAPL), which float above the water table, and others denser than water (DNAPL), which migrate vertically by gravity, being retained in areas of lower permeability. Given their hydrophobicity, the presence of these compounds also generates a plume of groundwater contamination, as shown in Figure 1. If they are volatile compounds, they also generate toxic gases that can reach the atmosphere. The low biodegradability and high toxicity of these organic compounds pose a significant risk to potential receptors in soil and groundwater.

Figure 1. Discharges of organic phases into soil and contamination plume generated in groundwater. Discharge of compounds denser than water, DNAPL and less dense than water, LNAPL.

A mature technology is the injection of oxidants into the subsurface (In Situ Chemical Oxidation, ISCO). Oxidants such as persulfate or hydrogen peroxide generate sulphate, hydroxyl or superoxide radicals in the presence of activators and/or catalysts. These radicals destroy a wide variety of dissolved organic pollutants in groundwater without generating toxic products. However, suppose there are residual amounts of hydrophobic organic phases not dissolved. In that case, the time required for their removal by ISCO technology can be very high, as oxidation occurs in the aqueous phase and the organic phases are poorly soluble. The addition of surfactants to the oxidant-activator reagents increases the solubilization of the organic compounds and, thus, their oxidation rate in the aqueous phase. The simultaneous injection of surfactant and oxidants in the subsoil is called S-ISCO technology.

Surfactant enhanced chemical oxidation (S-ISCO) is a promising remediation technology but requires site- and contaminant-specific research. Surfactants are amphiphilic substances with hydrophobic and hydrophilic ends. Its addition increases the solubilization of NAPLs trapped in soil pores, making the contaminant more accessible to the oxidant in the aqueous phase. The oxidants and surfactants used do not generate toxic products and are environmentally benign. By simultaneously injecting the surfactant and oxidant into the subsoil, the rate at which the mass of organic contaminants in the aqueous phase is removed increases, as shown in Figure 2.

Since the surfactant is an organic molecule, it competes with the pollutant for the oxidant. Therefore, the selection of the surfactant and the optimization of the concentration to be used is a key factor to reduce the unproductive consumption of oxidant and surfactant, increasing the efficiency of the process, reducing costs, and the time required. 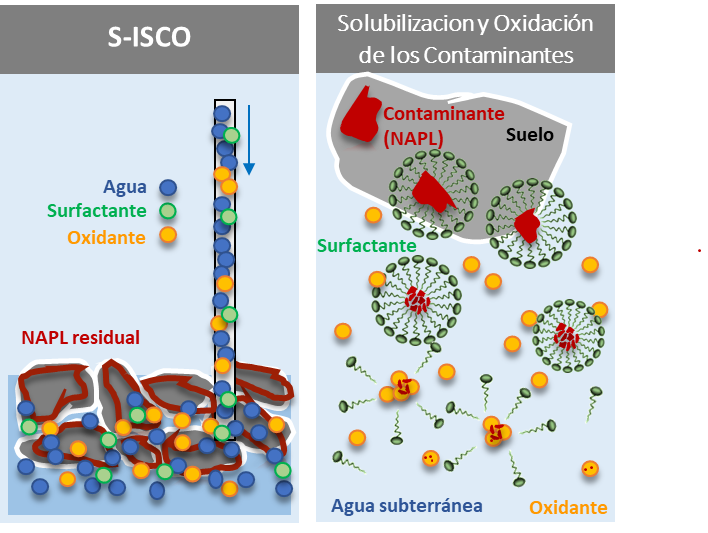 Figure 2. Injection of surfactants and oxidants into the subsoil for the removal of residual organic contamination trapped in soil pores.

S-ISCO technology is particularly suitable for removing low soluble and low volatile organic phases present in the subsoil. The solubility of many organic contaminants in groundwater is only a few mg/L. However, the contamination trapped in the soil, when residual NAPL is present, is thousands of mg per kg of soil. The final removal of these contaminants in groundwater will not occur until the organic phase that generates the contamination plume in the aqueous phase has disappeared. The injection of oxidants (ISCO) only removes the dissolved contamination in the groundwater. The equilibrium in the aqueous solubility of organic compounds from the NAPL is again reached after the ISCO process. This fact means that contamination rebounds appear in the aqueous phase, causing the problem to persist over time. On the other hand, the injection of surfactant solutions and subsequent extraction of the extracted solution (SEAR) produces an aqueous solution with surfactants and contaminants, which must be treated to remove the contaminants.

In S-ISCO technology, oxidants and surfactant are injected into the subsurface, and the contaminants destruction occurs in situ, without extraction of the injected solution.  The surfactants used are biodegradable and do not interfere with subsequent bioremediation or natural attenuation treatments. The oxidants used do not generate toxic products in the subsoil.

The INPROQUIMA group (UCM, Fac Chemistry) has the necessary knowledge and infrastructure to optimize the most suitable surfactant, oxidant and activators for the specific site.

Proper design of this treatment requires knowledge of the interaction between oxidants, pollutants and surfactants, and knowledge of the kinetics of the processes involved. For each contaminated site, it is necessary to assess:

The S-ISCO application requires knowledge of the nature and characteristics of the soil (pH, cation exchange capacity, particle size, permeability, etc.), the type of surfactant (ionic, non-ionic, its stability, etc.) and the type of contaminants.  If a treatment train is to be applied, the last one being the bioremediation stage, it is necessary to assess the impact of the treatment on the microbial population. To this end, toxicity and biological activity tests are carried out before and after the S-ISCO treatment.

INPROQUIMA has the necessary infrastructure, personnel and know-how to carry out these tasks. INPROQUIMA can also advise on the design of the application of this technology on a pilot or field scale to select the injection points and the injection strategy, and the required doses and concentrations of surfactants and oxidants.

The INPROQUIMA group successfully applies the design of the S-ISCO process and its application in collaboration with companies and administrations in different contaminated sites, both for light organic phases (fuel and diesel spills) and dense organic phases (chlorinated compounds) and different soil lithologies.