STRUCTURAL AND FUNCTIONAL ANALYSIS OF WATER SOLUBLE AND MEMBRANE PROTEINS. USE OF NANODISCS

The group specializes in functional and structural analysis of proteins using different spectroscopy tools (absorption, fluorescence and circular dichroism) and chemical-physical approaches (calorimetry, ultracentrifugation), with special emphasis on proteins capable of interacting with and/or integrating within biological membranes. This analysis includes enzyme assays in the case of enzymes and other functional assays such as hemolysis measures, lipid fusion or loss of aqueous contents in the case of other proteins. We are pioneers in the preparation and characterization of nanodiscs, a methodology that allows the analysis of membrane proteins in solution, integrated in lipidic bilayers identical to the natural ones and without the use of detergents.

Proteins have two types of chromophores (chemical groups capable of interacting with light): the peptide bond itself, which is inherent to the formation of a polypeptide chain, and the lateral chains of their aromatic amino acids. The spectroscopic properties of chromophores depend not only on their structure, but also on their environment. For this reason, spectroscopic analysis of proteins reveals unequivocal structural information about the native conformation of a protein, using quantities of around 100 µg of sample. Changing the structure of a protein will change the environment of its chromophores and hence their spectroscopic properties. This information is even more characteristic if proteins are found in a hydrophobic medium, such as the sinus of a lipid membrane. 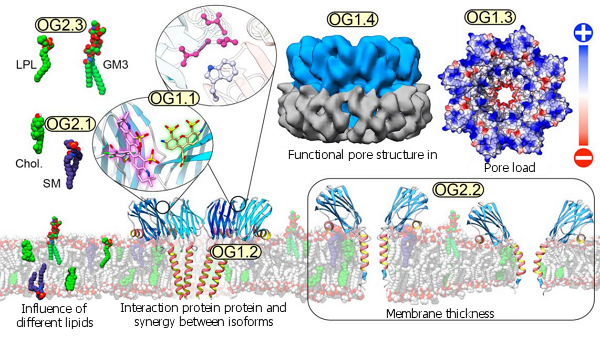 The figure summarizes the diversity of situations that allow us to analyze the methodology offered, from the use of a great diversity of lipids to the determination of the three-dimensional structure of membrane proteins inserted in nanodiscs, through the local study of the interactions that take place, either between protein and lipids or between this and other protein units. It is also possible to study multiple biophysical and thermodynamic parameters related to membrane thickness, fluidity, permeability or the existence of well-differentiated local domains.

We master a whole battery of tests aimed at studying proteins with model lipid vesicles, some of which are highly complex and based on the change in the properties of fluorescent probes integrated into these membranes. Calorimetric measurements also reveal the thermodynamic parameters that govern these interactions.

Finally, nanodiscs preparation has been optimized. These nanodiscs are lipidic particles, with lamellar bilayer structure, but completely soluble in water. These structures allow the study of membrane proteins that would otherwise be impossible to handle in solution without the use of detergents.

One of the main advantages of the techniques developed in the group is the scarce material needed to carry out the analysis. In many cases, this analysis is not even destructive, so that the material used is completely recovered after analysis. There are very few groups in the Spanish national territory with the necessary instrumentation and background to carry out this very diverse analysis, especially with regard to the study of proteins associated with biological membranes. Their insolubility often makes it necessary to use detergents, which do not form lamellar structures and therefore do not properly mimic a biological membrane. The use of nanodiscs, pioneered by us, is another great advantage because it solves this problem. It should be remembered that most of the receptors with pharmacological interest are precisely integral membrane proteins.

The development of this technology has been carried out within the research group of the Biochemistry and Molecular Biology Department of the Faculty of Chemical Sciences, which calls itself the "Toxic Proteins Group". This group has a scientific background of more than 30 years of experience dedicated to the use and optimization of the methodologies offered, which is reflected in more than 200 research articles and 5 patents (one worldwide, one European and three of national application).

In addition to the technology offered, the group is capable of producing in large quantities (tens of milligrams) the proteins studied, using heterologous systems such as the Escherichia coli and Lactococcus lactis bacteria and the yeast Pichia pastoris. The latter two organisms are also considered GRAS (Generally Regarded As Safe), a condition that greatly facilitates the marketing of the proteins produced.