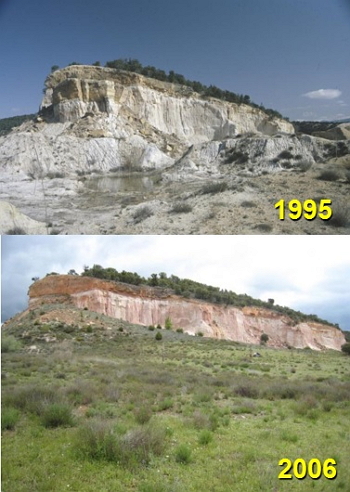 Ecological restoration based on geomorphic restoration at La Revilla (Segovia). 1995-2006.

Geomorphic Restoration is the process of designing and building landforms which replicates the morphology and dynamics of natural ones in those places that have been transformed –and the ecosystems have been severely degraded-, mostly by earth-movement human activities (mining, civil works or urban developments). The transferable solutions are always results of ad hoc research, and are able to reproduce the topographical conditions, and of substratum and soil structure, which are stable for the scenarios subject of intervention (mining and civil works reclamation, landfills…). All that without using expensive off-site materials, and structures, to control erosion and sedimentation, such as ditches, concrete or rock drains (rip-rap)… It is to say, just by the exclusive action of replacement and regrading of earth, waste, spoil, debris, soils… To reconstruct those natural and unalterable landforms, finding stable undisturbed landform analogues is requested, developed in environmental conditions similar to the scenario that request the geomorphic restoration.

Geomorphic Restoration withdraws ecological, holistic, durable and efficient solutions to complex problems and locations, such as environmental impact (and social conflicts) related with earth-movement in settings with high ecological and landscape value, or where there is a high land instability because of soil erosion, mass movement or other active geomorphic processes. These solutions fit well in mining, landfills and civil work reclamation projects, landscaping or environmental impact statements of earth-movement activities, among others. And they are complemented and validated by using hydrological, erosion and landscape evolution models.

Geomorphic Restoration outperform then the traditional methods of rehabilitation or reclamation and is a core of truly ecological and landscape restoration approaches, because it lays the foundations for restoring ecosystem and landscape functionality and processes.   The Geomorphic Restoration group is one in only three worldwide that is recognized and authorized by the GeoFluv company to all-in-one transfer and training method. Other geomorphic restoration solutions can be provided, such as hard-rock regrading and reshaping and the management of geomorphic processes different to the fluvial ones.

The essence of this approach is to identify the type of drainage network, which would tend to form over a long time given the site’s earth materials, relief, and climate to achieve stable landforms, and to design and build them.

The designed slopes and stream channels are stable because they are in balance with these conditions just as geomorphically-mature landforms have natural stability. This stability also applies to extreme rainfall events or earthquakes, because the mature reference landscapes have been already subjected to those events, thus adopting stable configurations. All that different from the conventional solutions of land reclamation (gradient terraces, outslope-benches, ditches, rock drains…) which are subject to recurrent failure, and have a low ecological and landscape integration in the surroundings. 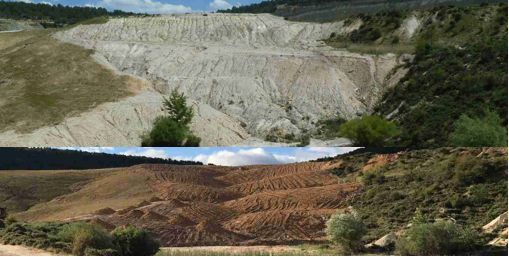 Over the last decades, hydrologists have observed and measured stable natural streams and determined mathematical relationships that describe these stable stream types. Essential among these determinations is that channel morphology is directly related to bankfull and flood prone discharges. The natural channel is shaped to keep its sediment load and stream flow in balance during both low-flow and extreme events. The GeoFluv fluvial geomorphic approach to land reclamation relates the upland landforms to the stream channel form. Both can be formed similarly by flowing water. Previous application of alternative land-shaping practices may have been limited for several reasons, including the narrow extent of training in fluvial geomorphic principles and the complexity of the calculations to create an integrated landform, Natural Regrade addresses all these potential limitations.

GeoFluv makes a draft landform based on empirically determined fluvial geomorphic mathematical relationships. The final design can be output as a 3D surface file for input to GPS-machine guidance equipment to aid construction. 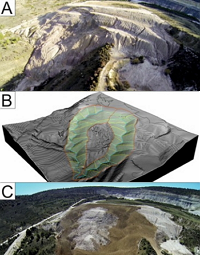 Restoration of a landslide at the Nuria Mine, 2015.

(1) Locate stable natural (mature) landforms in earth materials like to the mine wastes to be reclaimed, within also similar environmental conditions than those of the project area (climate, soils and vegetation); after that, measure at them characteristic features of the landforms (such as drainage density or distance from ridgelines to head’s channels, among others).

(2) Set the topographic conditions of the design area in CAD, analyzing, for instance, run-on and base levels.

(3) Make a geomorphic reclamation design following GeoFluv - Natural Regrade, guaranteeing its earth-movement feasibility and validating its stability and correct performance. Feasibility is mostly validated in terms of earth movement (cut and fill) balance. Natural Regrade calculates material balances and centroids, and optimum material movement routes, for the resulting designs. Validating the stability and correct performance of the design can be made evaluating erosive tractive forces or by using erosion, slope stability and landscape evolution models and software, which allow comparisons with conventional reclamation solutions.

(4) Get the output topographic information for automatic machine control or staking out, with its consequent designed landforms construction.

(5) Monitor the hydrological and erosive response and sediment yield.

-Stable mature landforms yield equal or less sediment than undisturbed native sites, as confirmed in experiments such as the carried out at La Plata, New Mexico. Higher slope stability safety factors for geomorphic designs compared to traditional valley fills, also natural channel morphology conveys water and sediment discharge in hydrologic balance, and it meets environmental requirements (similar water quality than baseline), it is Self-maintaining. The stable landforms do not require long term maintenance, moreover, no artificial structures are needed, a stable topography is built with the only use of wastes from extraction (the need of topsoil and revegetation is common for both approaches) and temporary sediment ponds can be used.

-Topographic variability maximizes biodiversity as the built landscape has varying aspects and slope which promotes vegetation success and animal habitat. Landscape designs provide a broader range of post-mining land use alternatives, as well as timber production and forest functions are maximized.

- The costs generate very significant savings due to the absence of maintenance, materials and structures of work (up to 37%). In short, these practices can be recognized as natural landscapes, blending with the landscapes of the surroundings, with intrinsic beauty.

The UCM group in Geomorphic Restoration met and learnt GeoFluv – Natural Regrade in 2009. Since then, maintains a close collaboration with its creator, Nicholas Bugosh. Before 2009, our group developed some of the examples that are considered pioneers at a global scale in Geomorphic Restoration. It is the case of the landform reconstruction at La Revilla, at the province of Segovia, which received an European restoration award. Since 2009, our transference in this field has been broad, mostly to the mining industry.

Currently, the group has also the ability and expertise to transfer additional knowledge and solutions on Geomorphic Restoration, in addition to GeoFluv-Natural Regrade. Specifically:

The philosophy of this transference is scrupulously careful with no competing with consultant companies. This competence is not possible at the moment, since our group is the only one in Spain, and in most of Europe, which uses GeoFluv-Natural Regrade Talus Royal and SIBERIA. And because of that, we are actually working on transferring such knowledge to companies and administrations.