An ophthalmological device is presented that allows objective tests of optometry through the simulation of human eye with these elements:

The simulation is done through the use of pills that act as lenses, allowing to assign variables to the representation of the cornea. 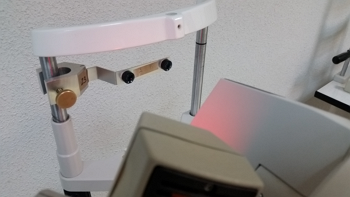 Device attached to a keratometer

The lenses that act as a contact lens are cylinders of a variable diameter, between approximately 12 and 16 mm. Its usual purpose is its use to generate rigid, semi-rigid or hydrophilic contact lenses, with different chemical coampositions of the plastic material according to the final use and the needs of the eye to which they are intended. The power will be appropriate to the range of the device to be used. The optical instrument to which the support is attached is the chin guard where the device is installed. It can be used as an objective evaluation test, with the use of similar surfaces with different radius and power values.

The device is useful for applications in which optometric tests can be simulated without resorting to human eyes, for example, repeat repeated learning in some tests to determine the characters of the cornea. 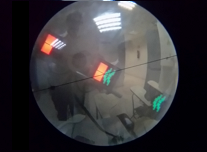 Example of image seen through the device

It has been elaborated in the mechanical workshop of the Faculty of Physics of the university Complutense of Madrid after the dispatch of the design of the inventors of the Faculty of Optics and Optometry for its execution. This technology is developed as an invention patent in 2007.

It is an essential device in the practice of teams of special interest in the subjects of optometry of the Faculty of Optics and Optometry since 2008 uninterruptedly.