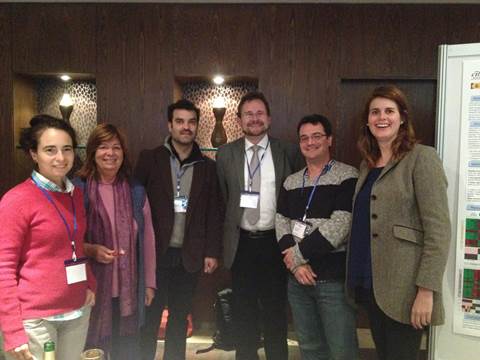 Prof. María Vallet-Regí imparted the Keynote invited "Mesoporous Materials: from bulk to nanoparticles” in the 26th SYMPOSIUM AND ANNUAL MEETING OF THE INTERNATIONAL SOCIETY FOR CERAMICS IN MEDICINE (BIOCERAMICS 26). November 8th 2014. 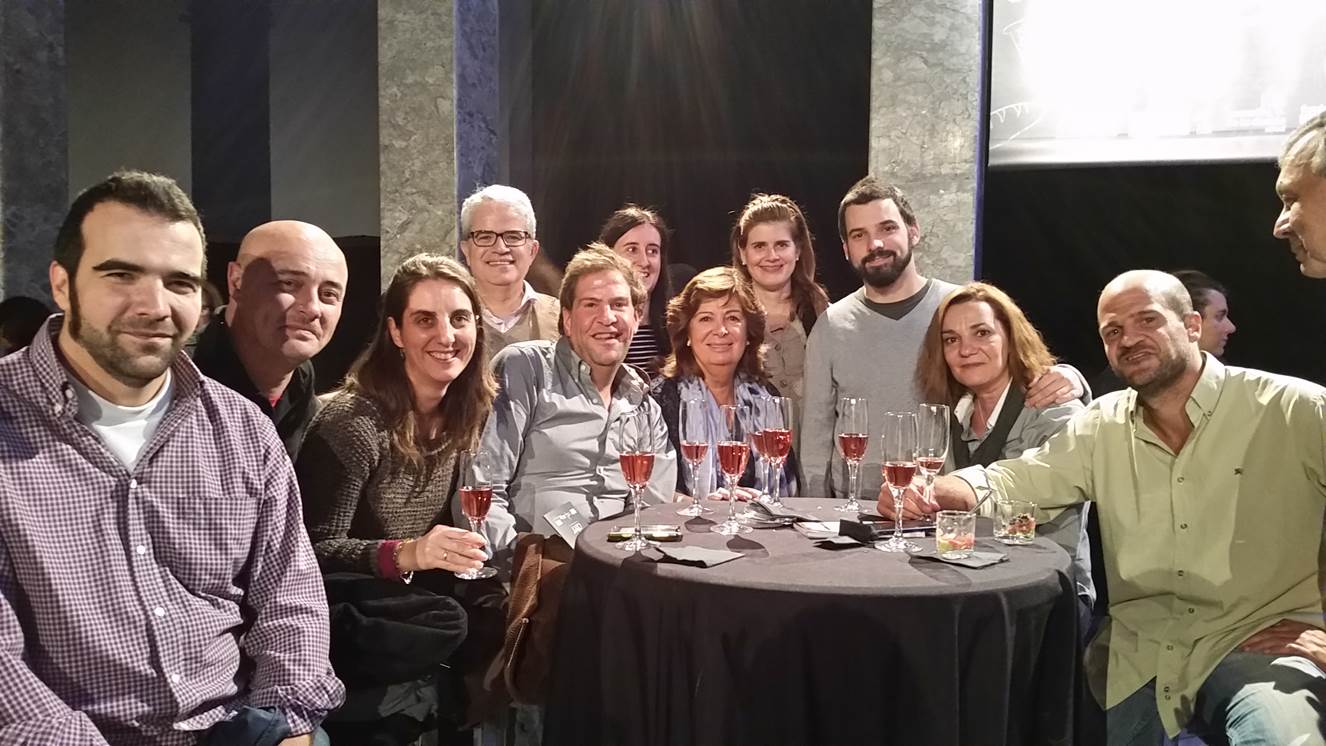 Winners of “2014 IDEA² Madrid innovation mentorship prize” Madrid-MIT M+Visión Consortium. The Madrid-MIT M+Visión Consortium, a partnership of the regional government of Madrid and the Massachusetts Institute of Technology (MIT), announced the winners for its innovation mentorship program, IDEA² Madrid on 3 November 2014 The Project “NANOIMPLANT: Nanostructured coatings for orthopedic implants” has been awarded with the “2014 IDEA² Madrid innovation mentorship prize”. The GIBI team members of the University Complutense of Madrid, Prof María Vallet, Dr Isabel Izquierdo and Dr. Daniel Arcos participate NANOIMPLANT Project together with other researchers of CSIC. IDEA² Madrid is designed to help Madrid’s emerging biomedical innovators and entrepreneurs refine their project ideas and get guidance and expertise to realize them. It is focused on developing innovative technologies and businesses that could solve important problems in healthcare.

Prof. María Vallet-Regí participated in the Workshop on Energy, Engineering and Industry hosted by Orkestra and the Spanish Royal Academy of Engineering as a fórum of discussion for new industrial developments and directives. Vizcaya. Wednesday, October 8th 2014. 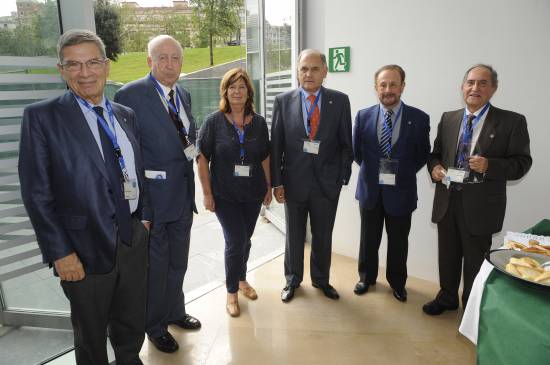 Prof. María Vallet-Regí imparted the Plenary Closing IV Conferency inside the Spanish Week of Biotechnology Title of her talk: Nanoparticles in Medicine: An Introduction, at the Biology Faculty of Complutense University of Madrid. 6-11 October 2014.

Miss Anahi Philippart, Ph.D. of Prof. Aldo Boccaccini at the Erlangen-Nurnberg University, Germany, is performing a two months stay _September and October 2014_ in our research group, funded by the European project for the initial research training GlassCERCo coordinated by the Torino Polytechnic. Her activities are focused in the synthesis and characterization of mesoporous bioactive glasses. In the photograph Miss Philippart is on the right of Prof. Vallet-Regi. 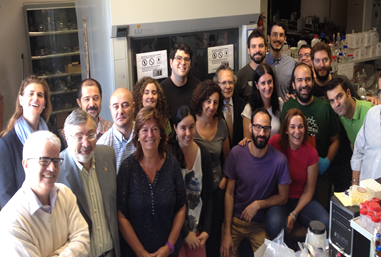 Prof. María Vallet-Regí imparted the Invited Lecture " Drug delivery and bacterial anti-adhesive surfaces: possibilities” in the Symposium “Bioceramics for bone and joint repair “ that took place in Warsaw University of Technology (Poland) on September 16th 2014, in the 2014 Fall Meeting - EMRS.

Some members of this research group have been awarded with the first prize at the V Scientific Dissemination Contest organized by the UCM. The news awarded was entitled "A new osseous substitute for bone regeneration".

Prof Antonio Salinas imparted the invited Keynote: "Larry’s influences: from bioactive glasses to scaffolds for tissue engineering and nanoparticles for drug delivery " in the Symposium “Advances in Bioactive Glasses” that took place on Liverpool (UK) on September 3th 2014, in the framework of the 26th Annual Conference European Society for Biomaterials (ESB 2014). In the picture Larry Hench, and Antonio Salinas at the Cavern of Beatles Story Albert Dock in the Reception to Honour Larry Hench as 2014 Acta Biomaterialia Gold Medal Awardee. 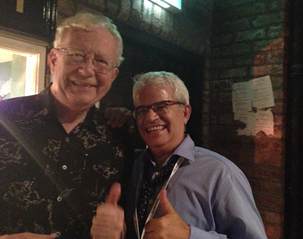 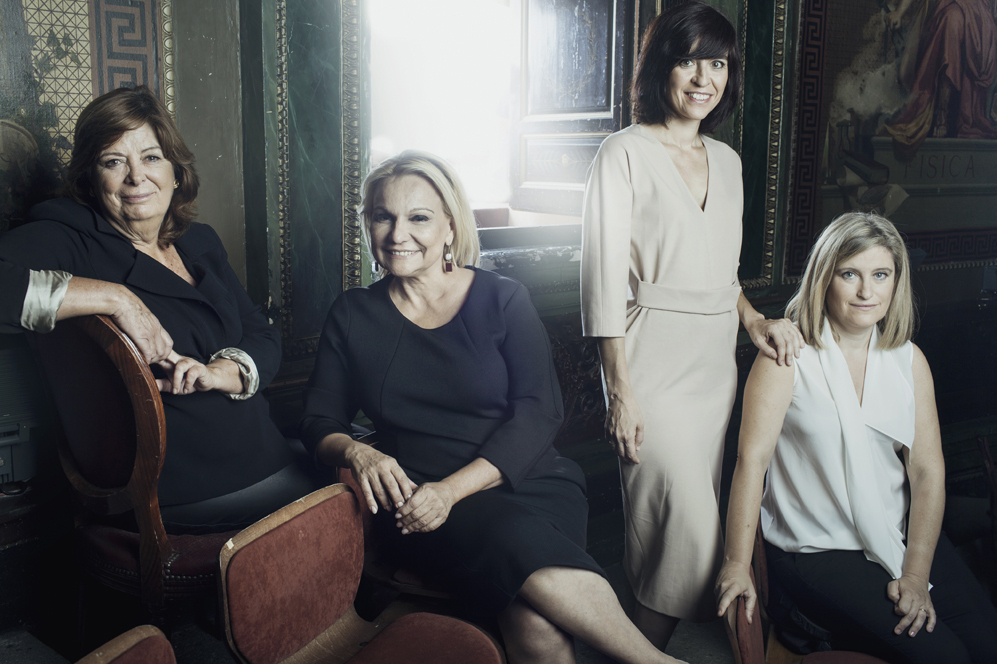 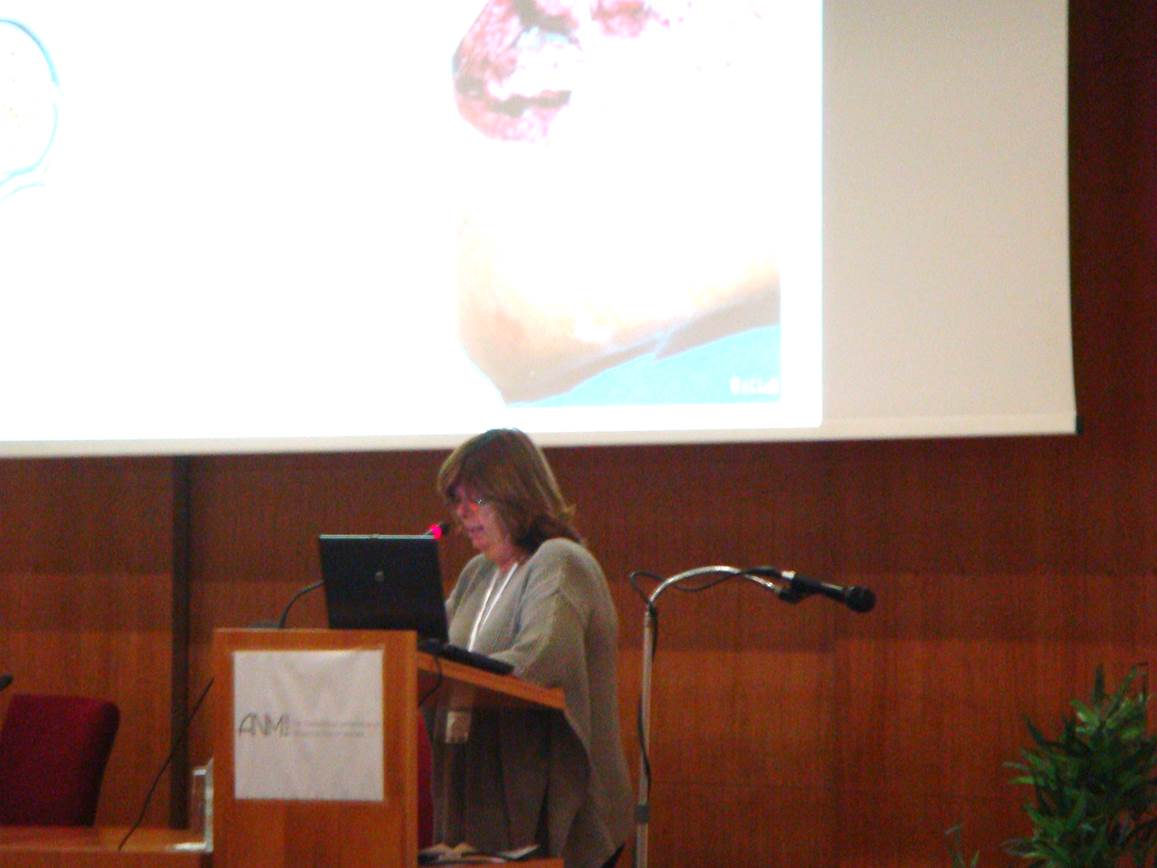 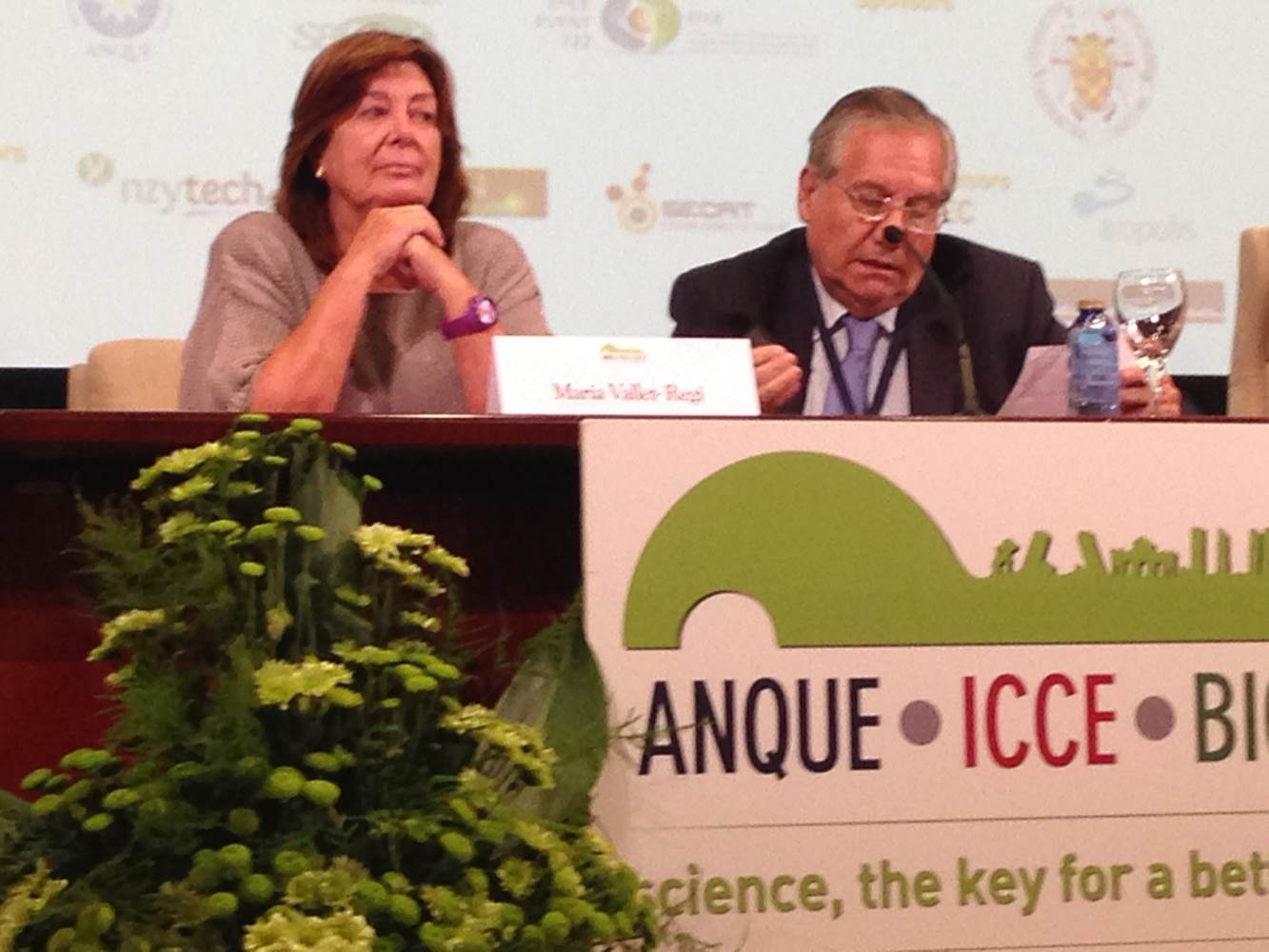 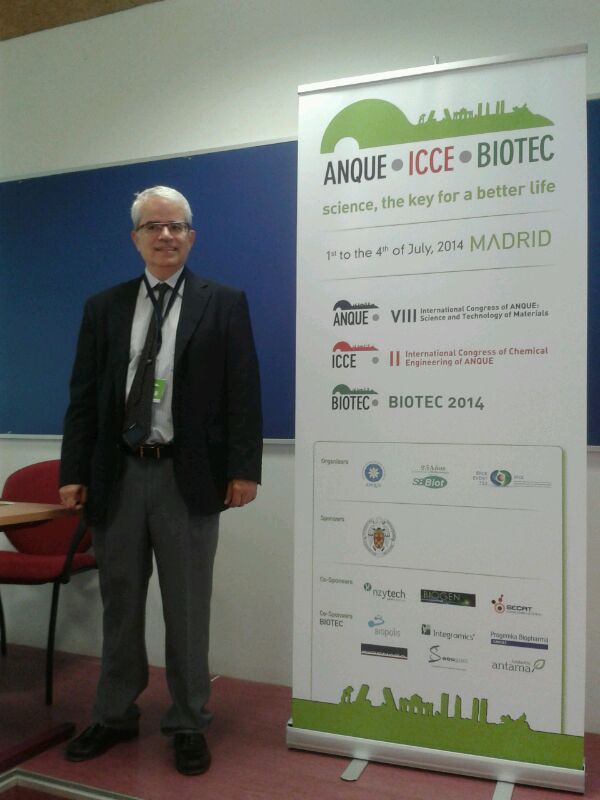 Dr. Montserrat Colilla imparted a conference at International Symposium on the Reactivity of Solid ISRS-18, held in June, 9-13, 2014, in Saint Petersburg, Russia. The title of the talk “Reactivity of Zwitterionic Mesostructured Bioceramics” was authored by M. Colilla, M. Martínez-Carmona, S. Sánchez-Salcedo and M. Vallet-Regí.

Prof. Vallet-regí during her visit to Mendeleev Museum in Saint Petersburg in June 2014 in the ISRS-18 context. Mendeleev’s library-dispatch

Lectern in which Prof. Mendeleev worked while developing the periodic table of elements. 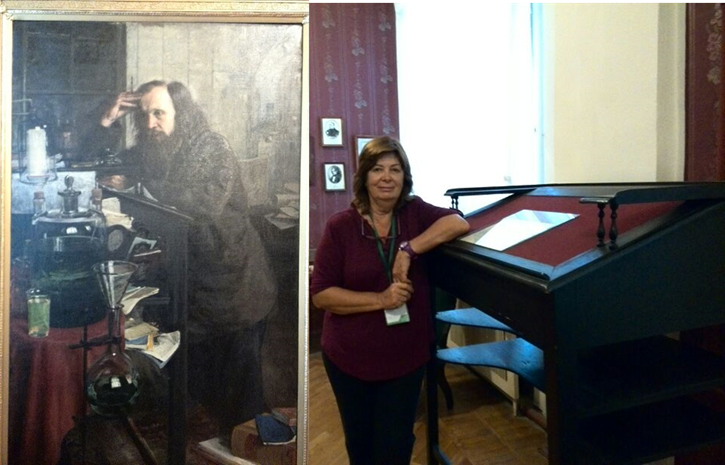 Prof. Vallet-Regí made a stay in Segovia on 3-4 of June participating in a series of conferences organized by RAI. Several of them highlighted in the figure of Proust and how he concluded the Law of definite proportions in the Chemistry House in Segovia.

On May 29th Prof Maria Vallet-Regi assisted to the conferences of Anne Jolliot _Research Professor of CNRS_ and Pierre Jolliot-Curie _Emeritus Professor of the College de France_ entitled: “Eve Curie an exceptional woman” and “Research as it was lived by three generations of scientists”. The lectures of the two grandsons of Mme. Curie took place on the Biblioteca Nacional de España. The act was celebrated as a consequence of the exposition: “Maria Solodowska-Curie: a polish woman in Paris” that from March 5th to September 7th 2014 is open in the Museo Nacional de Ciencias Naturales to commemorate of the centenary creation of the first Institutes devoted to the applications of radioactivity: Radioactivity Institute of Madrid (1910), Radium Institute of Paris (1914) and Radium Institute of Varsaw (1932). The link to the exposition: 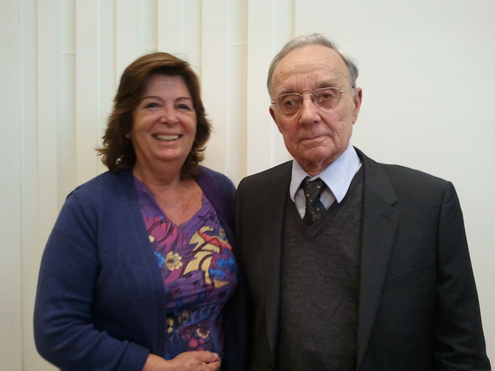 Three new CIBER INTRAMURAL 2014-2015 projects have been awarded to the GIBI-UCM group for scientific collaboration within researchers of the groups of the CIBER-BBN network:

Spring: Gated Scaffolds for the PRevention of implant Infection

Recently, Juan Luis Paris y Natividad Gómez have been incorporated to our research team to carry out their PhD studies. Both students will make their research, granted with two FPI fellowships (Ministerio de Economía y Competitividad).

For the first time, the 4th International Conference on Superconductivity and Magnetism 2014 has included the session “Magnetic Applications in a BIO World”, chaired by Prof. María Vallet Regí.

On April 2014, Marco Amores and Francisco Javier García Campos have been incorporated to our GIBI-UCM team granted with two “Aids for initiation in research from the CIBER-BBN”. Both students will carry out research while finishing their master studies and starting a PhD.

On April 11th 2014, Prof. María Vallet- Regí gave the talk entitled “Chemistry of implants and nanomedicine” at the College of Science in Valladolid University

The book Bio-Ceramics with Clinical Applications, ISBN: 9781118406755 edited by María Vallet-Regí, published on May 13th. More information on http://eu.wiley.com/WileyCDA/WileyTitle/productCd-1118406753.html

Prof. Dr. Jean Michel Boulier, member of the Agening network, will be our visitor in the week of April 21st.

On 23-25 March Prof. Dr. Aldo R. Boccaccini received the visit of Prof. Maria Vallet-Regi, Professor of Inorganic Chemistry and Head of the Research Group Smart Biomaterials in the Department of Inorganic and Bioinorganic Chemistry of the Faculty of Pharmacy at Universidad Complutense de Madrid (Spain). Prof. Vallet-Regi is an international leading scientist in the field of bioceramics, in particular in the area of silica based ordered mesoporous materials for gene therapy and transfection and tissue engineering. Prof. Vallet-Regi is also the head of the European Network of Excellence for the Prevention and Treatment of Osteoporotic Fractures, “Ageing” in which Prof. A. R. Boccaccini is one of the members for Germany. On 25th March Prof. Vallet-Regi presented the lecture:“Biomaterials design: from implants to regenerative medicine” in the context of the program of Invited Seminars to mark the 5th Anniversary of the Institute of Biomaterials and in the framework of the 10th TOPbiomat Seminar

Professor María Vallet Regí has recently published the book entitled “Biomaterials”, from the series “What do we know about…?” from the Spanish National Research Council (CSIC).

The book Bio-Ceramics with Clinical Applications has just been published by Wiley.

This book provides important information concerning the synthesis and characterisation of bioceramics, and will be useful for all researchers involved in this field. The contents cover bioceramics, biomimetism, bioactive ceramics, and inert ceramics. The authors will pay special attention to explain the relationship between the synthesis processes and the subsequent clinical applications.
Written by Maria Vallet-Regi and a small team of authors based at the Universidad Complutense de Madrid, Spain,y CIBER-BBN the book provides a cohesive, structured account of the advances and new applications of bioceramics in the clinical world.

Biomaterials to prevent and combat osteoporosis

The relevance of biomaterials in strategies to prevent and treat osteoporosis is the theme of a review article written by a group of European scientists which is to be published in the journal ACTA BIOMATERIALIA [D. Arcos, A.R. Boccaccini, M. Bohner, A. Díez-Pérez, M. Epple, E. Gómez-Barrena, A. Herrera, J.A. Planell, L. Rodríguez-Mañas, M. Vallet-Regí. THE RELEVANCE OF BIOMATERIALS TO THE PREVENTION AND TREATMENT OF OSTEOPOROSIS. Acta Biomaterialia. 1793–1805 (2014)].
Written by researchers representing the three relevant communities, e.g. clinicians, materials scientists and industrial advisors, the review discusses currently available biomaterials used to treat osteoporotic bone fractures and guides the reader through the expanding field of novel multifunctional and bioactive materials, in particular drug- and cell-loaded biomaterials, which are still at laboratory scale but reveal great promise for clinical applications. The review paper originates in thoughts, proposals and conclusions obtained within the Spanish and European Network of Excellence for the Prevention and Treatment of Osteoporotic Fractures, “Ageing”, an effort led by Prof. Maria Vallet -Regi (Uní. Complutense de Madrid, Spain), and as a result of intensive interdisciplinary discussions that followed a one day International Symposium "Ageing and osteoporosis: current situation and future perspectives " held in Madrid in April 2013.

Lecturers from Vallet-Regi group have been part of the teaching staff of the Master Mundus "Molecular Nano- and Biophotonics for Telecomunications and Biotechnologies".

The paper “Mesoporous silica nanoparticles for the design of smart delivery nanodevices” by Montserrat Colilla, Blanca González and María Vallet-Regí, members of the Smart Biomaterials Research Group - GIBI-UCM, has been one of the ten most visited papers of BIOMATERIALS SCIENCE JOURNAL in the period of January – September 2013.

This review paper deals with the most recent advances in systems based on mesoporous silica nanoparticles (MSNP) with applications in Nanomedicine. In particular, this review takes a closer look at the potential combination of MSNP, stimuli activated molecular nanogates and magnetic nanoparticles, as well as to the present scientific challenges regarding the need for a faster transition from the laboratory workbench to the clinical application.