IN VITRO METHOD TO RECOVER THE EXPRESSION OF THE F5 GENE ENCODING COAGULATION FACTOR V, THROUGH ADVANCED THERAPIES

Within the UCM Group of Advanced Therapies: gene and cellular, and the Genetics Group of the Santa Creu i Sant Pau Hospital of Barcelona, a method has been developed for the in vitro correction of mutations in the F5 gene, which give rise to the deficit of coagulation factor V, and the generation of tools with which to "cure" this type of coagulopathy that today has no treatment, not even palliative treatment of the symptoms. To this end, the CRISPR/Cas9 methodology is used to correct a new pathological mutation described by the research team, but which could be applied to other types of mutations in the same F5 gene.

The tools for treating the coagulopathy generated by this mutation are protected by a national patent (ES2785323B2) with international PCT extension. 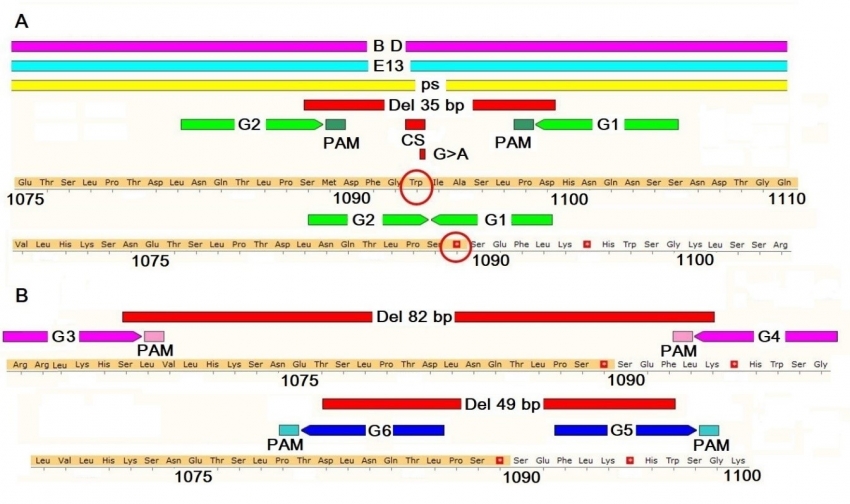 Design of CRISPR/Cas9 gene editing guides for obtaining the mutated cell model (A), and for mutation reversal and correction (B).

Factor V is an essential protein involved in coagulation and plays a key role in the so-called blood coagulation cascade, due to its procoagulant and anticoagulant activity.

Factor V deficiency is a coagulation disorder associated with mutations in the F5 gene that is clinically characterized by a heterogeneous spectrum of bleeding manifestations, ranging from mucosal or soft tissue bleeds to life-threatening hemorrhages. There is currently no palliative or curative treatment for this disease.

To restore the expression of the F5 gene encoding coagulation factor V, two different guide pairs can be used to correct the mutation identified at nucleotide 3279 of the F5 gene, which generates a nonsense mutation in the amino acid sequence of factor V that results in a stop codon, producing a truncated protein with no coagulant function.

Using any of the guide pairs, a cell culture is obtained in which the expression of the F5 gene is recovered and the mutation is reversed, which opens the possibility of approaching a therapeutic strategy based on gene or cell therapy protocols.

Tools are provided to "cure" (not palliate) this congenital coagulopathy derived from a mutation in the F5 gene, acting specifically on the mutation that produces the coagulation factor V deficiency, establishing a curative treatment of long time or permanent and individualized for each patient.

In the cell culture models obtained with the guide pairs, it is proposed to achieve a correction efficacy of approximately 40%, which would imply going from a severe phenotype to a mild asymptomatic phenotype.

This method has been developed by the UCM Advanced Therapies Group. Two general lines of research are carried out, the gene therapy line and the cell therapy line, but with a common objective, which is to establish protocols based on these two strategies for the treatment of congenital coagulopathies of monogenic origin, such as hemophilia A, hemophilia B and coagulation factor V deficiency.

We are interested in contacting companies wishing to obtain a license to exploit this patent. In addition, as we have been doing so far, we are open to establish collaborations in the form of research agreements with companies interested in any of the research lines of the group.