Changes in Southwestern Europe’s climate which happened between 12 and 5 million years ago had a drastic impact over the rodent communities, study says. These profound changes in environmental conditions led to a separation between species adapted to arid environments which migrated to interior regions of the Iberian Peninsula and species adapted to humid environments thriving in the north of the Mediterranean coast, where Catalonia and France are today. The study led by a team from Universidad Complutense de Madrid, Madrid, Spain, analyzed more than a hundred fossil sites from the Iberian Peninsula and South of France to reach these conclusions. 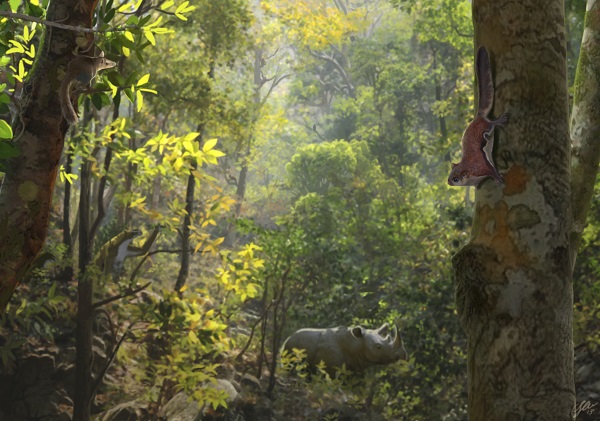 Figure legend: Life restoration of a flying squirrel (at the forefront) in the forest environments from the northern region (Catalonia and south of France) around 10 million years ago by Oscar Sanisidro (Vertebrate Paleontology. Biodiversity Institute, University of Kansas).

UCC-UCM, February 6th The oldest studied rodent fauna in this work, which inhabited the Iberian Peninsula from twelve million years ago, progressively shifted north looking for humid environments to survive climate change that caused prominent dry and cold environments in central Iberia. According to an investigation leading by Universidad Complutense de Madrid (UCM).

The results of this study, published this week in the Nature Publishing Group Scientific Reports, allow us to know the effects of climate change on past biodiversity. Based on the analysis of changes in faunas with different ecological features (dietary habits, habitat preferences, etc).

The study focuses on the rodent faunas that inhabited the Iberian Peninsula between 12 and 5 million years ago. This timeframe is particularly relevant for the evolution of past climate as it is a period of intense cooling coupled with increased aridity at a global scale. This global trend radically transformed landscapes in Southwestern Europe, which became increasingly more arid.

‘We compiled information from all the rodent species present at more than hundred fossil sites of Iberian Peninsula and the South of France, which allow us to statistically evaluate how this rodent communities were grouped based on their ecological affinities. Then, we tested how these associations were affected by the critical environmental changes happening in the region between 12 and 5 million years ago’ explains Fernando Blanco researcher at the Department of Geodynamics, Stratigraphy and Palaeontology (UCM).

This work has confirmed the strong influence two important environmental events had in mammal communities: the Vallesian crisis, ten million years ago and, more remarkably the Messinian crisis, six million years ago, where nearly the whole Mediterraean basin was completely drained.

A group with valuable information

During the studied time interval the climatic changes provoked diversity and distribution changes on rodent communities. ’One of the main outcomes of this study is that older faunas, linked to environments that were disappearing due to increased aridity at the time, were displaced to the north surviving temporally in local refugia with more humid conditions, particularly in the region of Catalonia and the South of France’ adds Manuel Hernández Fernández, professor at Universidad Complutense de Madrid and senior author of the study.

Rodents are an ideal group to conduct palaeoecological research: 1) they are among the most diverse groups of mammals, 2) they are widely distributed geographically across a huge range of ecosystems and 3) they are particularly sensitive to environmental changes. Furthermore, their fossil record is extraordinarily rich.

‘Only in the Iberian Peninsula, the number of fossil localities with rich assemblages of rodents are counted by the hundreds’ explains Fernando Blanco. ‘This study sets a primer to move the field toward more comprehensive studies spanning larger geographical regions and longer timeframes to ultimately understand in higher detail the effects of past climate change in extinct faunas’ adds Ana Rosa Gómez Cano from Institut Català de Paleontologia and coauthor of the article.

In addition to UCM, there are several institutions collaborating, including Consejo Superior de Investigaciones Científicas, Institut Català de Paleontologia, Museum für Naturkunde of Berlin and Harvard University, under the coordination of Universidad Complutense de Madrid. This study, are the result of more than 50 years of digging and research experience in Iberian Peninsula and southern France fossil sites.

As a final remark, it is important to underline that this kind of studies are essential to create explanatory, or even predictive, models to anticipate the effects that the climate change that we are experiencing might have upon current biodiversity. ‘By understanding in depth the effects of past climatic conditions on extinct biodiversity we might be able to anticipate these trends in the future. In this sense, I believe Palaeontology has a crucial role in the study of modern global change” explains Fernando Blanco.

» A sub-desert savanna spread across Madrid fourteen million years ago