Human action, key to antibiotic resistance among the giant tortoises of the Galapagos Islands 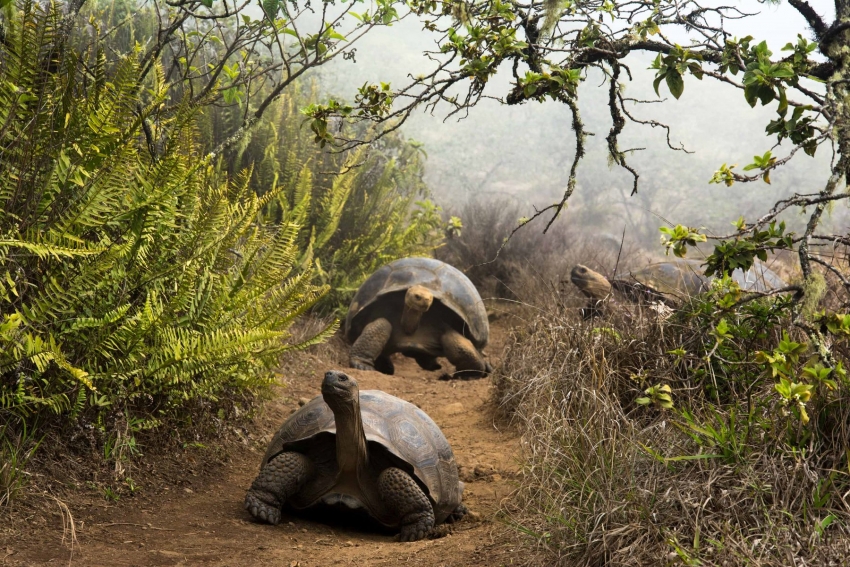 UCC-UCM, 13 July. The Giant Galapagos tortoises which live in contact with human farming and tourism activities, or in urbanised zones, have more bacterial resistance to antibiotics than those that live in more isolated ecosystems.

This is the main conclusion of the research published in  Environmental Pollution on which Universidad Complutense de Madrid participated together with the Charles Darwin Foundation (FCD), the Institute for Conservation Medicine of the Saint Louis Zoo (ICM), the Centre for Animal Health Research (INIA-CISA) and Universidad Europea de Madrid.

Ainoa Nieto, the lead author, researcher at ICM/FCD and collaborator in practical teaching and doctoral student at UCM, explains the new information provided by the study: “Human activities are facilitating the dispersal of resistance into the environment, which has already been observed in other parts of the world, but which has never been demonstrated on the Galapagos Islands.”

Resistance to antibiotics is one of the major threats to public health on the planet. The WHO has estimated that by 2050 it could be leading to more deaths than cancer, diabetes or traffic accidents. The detection of these bacteria in the Galapagos archipelago for the first time turn them into environmental pollutants and the tortoises into potential “sentinels or bioindicators” of the health of ecosystems.

PCR to identify genes and bacteria

To carry out the study, samples were taken from 270 tortoises in 2018 and 2019 in two locations with different characteristics in the Galapagos Islands:  the island of Santa Cruz, which has the largest human population, and the remote volcano of Alcedo on the island Isabela.

The analyses of resistance were carried out in the INIA-CISA laboratory in Madrid using a new methodology that allows the detection of resistance genes without the need to cultivate the bacteria, through PCR reactions in real time. This technique helps identify the genes and also the number of bacteria with resistant genes that are present in a sample. In total, 21 genes were analysed that codify resistance for eight of the antibiotic families most commonly used in human and animal medicine.

“We don’t know the real implications that this discovery could have for the health of giant tortoises, but resistance is considered environmental pollution, and the fact that species as iconic as Galapagos tortoises are entering into contact with these resistant bacteria implies that the ecosystem in which they live is being contaminated,” explains Casilda Rodríguez, a researcher at the Department of Pharmacology and Toxicology at UCM.

Finally, Ainoa Nieto recalls that antibiotics can be bought in the Galapagos without a medical prescription, for both human and veterinarian use. The authorities do not restrict their use, as happens in Spain or other countries in the world.