The UCM Research Group on Agent-based Social and Interdisciplinary Applications (UCM-GRASIA) has been developing distributed and intelligent applications for more than fifteen years, following the Multi-Agent Systems (MAS) paradigm and with focus on Software Engineering issues. It has developed a methodology and open-source tools, which are available at SourceForge.net and GitHub, which allow to structure and organize software components to implement intelligent applications that can be deployed in heterogeneous environments (web, mobile devices, embedded systems). The group has a long tradition in European projects in different areas: natural language processing, mobile equipment coordination, web services personalization, social computing, accessibility, solutions for people with disabilities, etc. 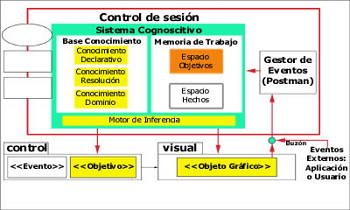 Internal architecture of a software agent.

A software agent is an autonomous entity, as it does not require continuous human supervision for acting, and is driven by goals, which it will try to accomplish by its own means or interacting with other agents and resources. Examples are robots, unmanned vehicles, chatbots. They are reactive because they have mechanisms to perceive the environment, and act on it, and pro-active, because they can elaborate a plan to satisfy a goal. An example can be an artificial real state agent, which instead of waiting for users to connect to the web site, it will look for sites to put announcements, try to publish advertisements or look for potential customers. Agents are normally distributed and can communicate among them. This sociability feature is fundamental to model complex problems as agent organizations, similarly to models of social interaction.

Designing and implementing multi-agent systems is not a simple task because the lack of mature methodologies and tools. However, the experience in the development of several real applications, UCM-GRASIA research group provides a framework and methodology for the development of these complex systems, INGENIAS, which is being used by other groups in different countries. The software is available at http://ingenias.sourceforge.net/

Multi-agent systems models are very similar to social and economic models, and this facilitates their understanding by non-experts in computer science.

For their application in distributed systems, it is a technology that can be deployed in almost any type of computer system in a network, and with few requirements for the end user.

They are highly customizable, so they facilitate the implementation of advanced and personalized web services, because it is possible to associate one or several agents for each user, and these can be configured and dynamically adapted to their specific needs.

UCM-GRASIA research group has developed several projects using agent technologies with companies and research centers, at national and international level, by participating in different projects, such as:

UCM-GRASIA offers also their participation for: