A novel procedure, which allows the optical characterization of solar concentrators by recording the light of a star at night, has been developed. As compared with other known methods, the present one shows the following advantages:

This technology is protected since 2005 by a patent (ES2199081). Partners interested in the implementation of this technology are required.

An observer located at the concentration region of a mirror and looking at the mirror sees some regions of if it illuminated because of the reflection of the light source. In fact, light is only observed from those points of the mirror for which the reflection law is fulfilled. 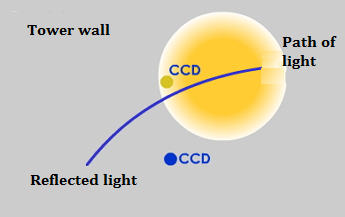 The yellow region represents the light reflected by the star on the wall (or hole) of the central tower. The CCD is located within this region and directed to the heliostat.

The present method relies on the application of these facts to the optical characterization of the mirror, i.e, the determination of the geometrical properties of the mirror allows predicting the features of the image produced by the mirror in any position and for any object. The method lies on recording with a CCD camera provided with the appropriate lens, mirror images when the mirror is in a position for which the light of a star is concentrated in the camera entrance. Applying the reflection law, for each recorded image the components of the unit vector normal to the surface mirror can be calculated for all bright points. By recording images for enough camera positions it is possible to obtain the normal vector map of the whole mirror surface. From now on this method will be named with the acronym SCCAN (Solar Concentrator Characterization At Night).

The SCCAN method provides information on the true direction of the mirror and thus, on the offset errors. For the case of mirrors consisting of facets, data allows checking of facets alignment (canting). In addition this method allows to measure the light intensity distribution in the concentration region for a point source as well as the contribution due to individual regions of the mirrored surface.

This procedure is applicable to any mirror as far as both the focal length and the mirror size have to be much greater than the diaphragm of the camera lens and the mirror has to be steerable under a control system which records the angle coordinates during data taking.

The equipment needed for this technique is only one (o several) CCD cameras and one (o several) PCs and therefore the cost is very low. In addition, characterizing several heliostats is also possible either, by using several cameras, which aim at the different heliostats, or by one larger resolution camera with the appropriate lens.  The SCCAN technique has not been tested yet in spherical concentrators with smaller focal length. For its application these solar dishes it will be necessary to solve some technical problems regarding the installation of the CCD camera/s. On the other hand, in principle, the method could be applied in parabolic through collectors if some technical problems are solved and specific analysis algorithms for this geometry is developed. 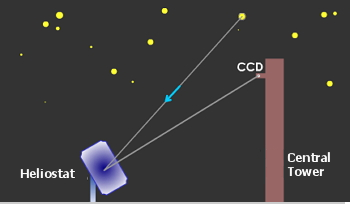 The SCCAN technique may be very useful for the quality control of solar concentrators already installed and working in a solar power plant.

The research team is being working in the field of cosmic ray physics and gamma rays astronomy since many years ago using ground detectors. This technology has been developed by UCM team in the frame of GRAAL project which in collaboration with Max-Planck institute has carried an experiment of atmosphere Cherenkov radiation using the heliostats of CESA-I field at the Almería Solar Platform.