Nomads Magazine (Scientific-technological product of Theoria: Critical Project of Social Sciences) is a useful electronic support available to the international scientific community and professionals in the social and legal sciences.

Founded in 1999 by the Professor of Social and Legal Sciences, Román Reyes, Nomadas, along with its international edition, Nomads. Mediterranean Perspectives, are editorials of theEMUI_ EuroMed University and the University Institute of Research Euro-Mediterranean University Institute EMUI, UCM center to which, by agreement of the Council of Government of December 16, 2009, is attached to the Research Group Theoria. Critical Project of Social Sciences, scientific-technical support and researcher of the Scientific Publication (ISSN 1578-6730 · Legal Deposit: M-49272-2000).

Currently edited by EMUI_ EuroMed Editions, it is disseminated through the Portal of Scientific Journals of the UCM. Given the acceptance of the product, it is necessary to publish it (full or selective) in conventional format, without excluding a CD edition. Proposals from publishers are accepted, preferably with international diffusion capacity.

Editorial Policy: It was not an easy task to overcome the difficulties of various origins that had to be faced by Nomads (1999 - continues) in their first years of life. No doubt because it is born with public will of academic-institutional criticism. And social. What was not 'well seen' in those times of 'postmodern hegemony and actuality'. 'Progre', of course. "Uncomfortable" publication, especially for those who have used the University as their own cortijo and reference of a model to understand and 'manage' all that carries the stamp of the institution, without anyone questioning the interests of the hegemonic groups that led.

Having overcome those bad moments' Nomads' has consolidated a specific 'Editorial Policy', which has earned him a recognition that fills us: the stamp of identity of 'Nomads must continue to be a platform from which, apart from Status or 'experiences', spread the emerging thinking 'without having to ask permission from anyone'. Although, of course, we respect it, ours has never been the 'institutional culture'. (The Power). Because by culture we only understand the slow (and effective) resistance of those who pretend to name reality from other angles of look: we are interested in what is (is happening), which, in itself, generates 'other written languages'. Like the artistic and literary production and, especially, of the theater and the cinema. Not in vain we opt for the subtitle 'Record of passages and maps in the culture and the knowledge'

Nomads was born as an obligatory complement to the Critical Dictionary of Social Sciences - Scientific-Social Terminology (Barcelona / Madrid, 1988 ss) and with the same will that has been defining the edition of a work considered to be already indispensable and which translates into a firm and explicit bet for the respect to the basic principles of our condition of university students. That is, plurality, tolerance and critical spirit.

We considered that, in this line, it was time to expand the offer to young researchers or doctoral students. Nomads invites them, therefore, to give publicity to their respective projects, however partial or provisional they may be considered, stimulating intellectual work and creativity among them. As a timely and useful tool for work, Nomads can not only become a platform for training, launching or promoting young promises, but also serves as a reference point for a permanent debate on those issues that affect the hottest news or that respond to expectations or priority interests of citizens, users of our services.

This will determine the pace and nature of our occupation, understanding that, from our peculiar position and responsibility, we can better contribute to a more fluid and fruitful dialogue between the Society and the Higher Centers of Research and Teaching. 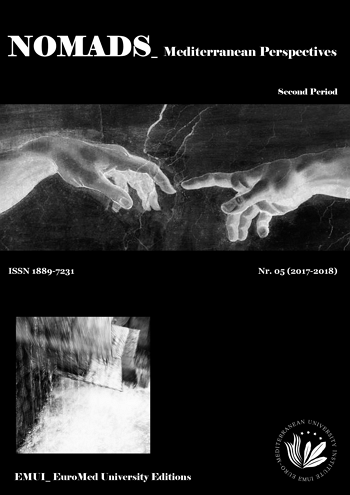 Nomads is a challenge that we launched in the scientific-technological market. Alternative products, or critical visions of existing ones are offered, while a critical record of them. For this we collect readings from various positions and for disparate users. In this way the reader is transferred to the risk of taking sides and, consequently, opting for the reading that suits him best.

It is guaranteed a plausible interaction of the two, obligatorily complementary, sciences: nomadic (open or theoretical) and sedentary (closed or problematic), to meet a modern and effective knowledge society.

Since 2009, an international magazine, Nomads, has been published in parallel and in conventional format. Mediterranean Perspectives, official body of the EMUI_ EuroMed Univesity (Salento), to which belongs the University Institute of Research EMUI (UCM). This international projection reinforces the presumed 'guarantee' of diffusion and scope of a product of high scientific and technological impact, as it is, at present, Nomads.

We understand that the proposed objectives are being met if we refer to the use of the virtual product: its web page receives an average of 7,000 visits / month, of which 36.68% come from Spain, 20.83% Of the USA, 8% of Mexico and 5.91% of Argentina (Sources: Ademails, Nedstat and UCM).

Nomads is offered as a publication of excellence in the Portal of Scientific Journals Complutense, with an impact factor highlighted in Database and Prestige Directories.