The INMIVET (Veterinary Microbial Infectology, formerly named INBAVET) research group of the Faculty of Veterinary Medicine (UCM) has developed a vaccine against Leishmania infection with which it has been able to induce resistance against cutaneous and visceral leishmaniasis. It is a genetic vaccine that combines a series of Leishmania infantum genes whose inoculation favors an antileishmanial immune response. The combination of the genes and its applications are protected by a patent (WO2013110824 A1). 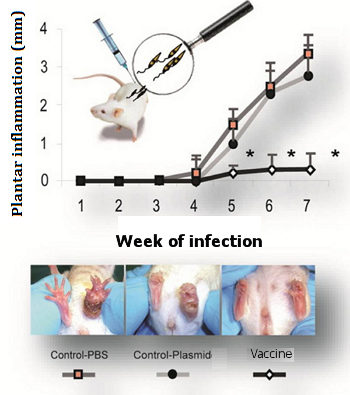 Progression of inflammation in the plantar pad following L. major infection in the 3 groups of mice, which had been respectively immunized with: PBS, the empty plasmid and the plasmid with the vaccine construct (panel A). Appearance of the injuries after 7 weeks of infection (panel B). Asterisks indicate the existence of significant differences with respect to the control groups (PBS control and empty plasmid control) (*P°<º0.05).

Leishmaniasis has a worldwide distribution with a prevalence of 12 million cases. Despite their enormous impact, they are still considered as neglected tropical diseases since the pharmaceutical industry does not find the investment against diseases of poor countries profitable. Unfortunately, there is now an increased distribution of these diseases even reaching developed countries. Spain is a clear example, in addition to being an endemic area of ​​canine leishmaniasis, also hosts an active outbreak of human leishmaniasis in the southwest of the Community of Madrid, with more than 600 patients affected so far.

The vaccine developed by the INMIVET group brings together Leishmania infantum genes characterized by functioning as antigenic determinants capable of expressing themselves in the vaccinated animal, inducing the activation of their immune system to face the infection. In this way, mice immunized with HisAK70 develop an immunophenotype resistant against infection with different species of Leismania (L. infantum or L. major), significantly reducing or even eliminating parasite loads in target organs, compared to the high susceptibility shown by control animals without vaccination.

Among the various immunization methodologies, the genetic vaccination (third-generation vaccines) is one of the most efficient. It is able to induce the synthesis of the protein encoding the gene included in the vaccine and to generate a specific and long-lasting immune response in the host. It is also safe, does not generate adverse reactions at the site of inoculation, unlike protein administrations. However, the INMIVET group studies alternative vaccine strategies adapted to current needs, using both adoptive transfer of autologous dendritic cells and perfecting other nanotechnology approaches approved by the FDA, which would facilitate its implantation and potential development through companies incorporating such technology.

Compared with other genetic vaccines currently marketed, this vaccine is composed exclusively of components of the parasite itself with a high specificity to discard autoimmune problems. In addition, it does not employ synthetic or plant origin natural adjuvants that can amplify in excess the proinflammatory response, but is the vaccine's own composition, which includes the HSP70 of the parasite, which functions as an immunomodulator directing the host's response towards the other components of the vaccine. Another advantage of this vaccine is that it does not favor the production of anti-Leishmania antibodies, which are inefficient in locating an intracellular parasite. In contrast, this vaccine is able to mitigate the natural susceptibility to infection through the attenuation of Th2-type cellular response. Finally, the multicomponent character of the vaccine guarantees a wide range of specific epitopes of great utility to generate cross protection against several species of the genus Leismania.

The INMIVET research group is headed by Prof. Ricardo de la Fuente López. The group started in 1985, belongs to the Department of Animal Health of the Faculty of Veterinary Medicine of the UCM and is composed of 7 people who develop their research work in the context of "One Health", attending social needs from a point of view of uman, veterinary and environmental health.

The group participates actively in collaboration with national and international experts. Through a nanotechnological and immunological intervention, INMIVET pursues the achievement of vaccine and immunotherapeutic protocols adapted to current needs. In this context, the INMIVET group is open to possible contacts with interested companies in the sector.

» Web of the research group