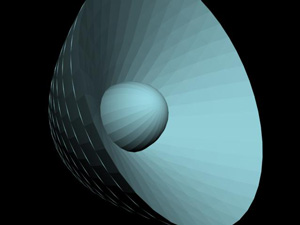 Image of the developed prototype

A new high-efficiency light-emitting collimation system has been developed, which is also capable of working in the reverse direction as a concentration system.

The collimation of the light generated by a light source allows the obtaining of high intensities in the collimation direction making possible its perception at great distances or the illumination of surfaces from far away, with great efficiency.

If the system works in the opposite direction, ie as a light concentrator, it allows concentrating light from a collimated source on a small surface, as is done in high concentration photovoltaic systems in which an attempt is made to reduce the maximum surface of the cell used.

The incorporation of LEDs into the lighting market in architecture and signaling in the last three years has marked an imperative need for the development of optical systems that allow their application to said environment.

The developed system optically optimizes the performance of collimating optics and is based on a theoretical study and a basic model that allows to parameterize the solution and therefore to optimize the design according to the specific needs: the required characteristics of collimation, chip size and size restrictions.

In general, such devices do not require a high degree of collimation, although in certain cases, such as flashlights, spotlights or beacons, collimation becomes essential in lighting systems.

Graphical representation of the operation of the collimation system, to the left, and concentration, to the right.

The incorporation of LEDs into the field of signaling has been unstoppable due to the advantages they incorporate with respect to other light sources used in a historical way.

These advantages are essentially based on their low consumption, high efficiency, spectral emission, possibility of continuous flow variation and safety against vibrations.

When using the new collimation system in conjunction with the LEDs you can concentrate the energy on a very small surface and therefore reduce the cost of the most expensive part of the photovoltaic systems.

This set, collimator system - LEDS, reduces the signal-to-noise ratio as it only receives power from the source.

This new device has been designed in the Department of Optics, belonging to the University School of Optics of the Universidad Complutense de Madrid. The main interest of the Complutense Applied Optics Group is based on an intense interaction with the optical industry, in the fields of energy, metrology and sensors, which is linked to the development of research programs funded by the various regional, state or europeans bodies.