GENETIC IDENTIFICATION AND CONTROL OF PREY BY AFFILIATION IN MOLECULAR TECHNIQUES

The genetic identification and paternity testing through molecular techniques in birds of prey are based on analysis of microsatellite DNA markers or STR and AFLP type (Amplified Fragment Length Polymorphism). The genetic fingerprint, which is obtained from a few drops of blood or feathers, is characteristic of the animal and unique in the population to which it belongs. Compared with their parents/offspring, it can be contrasted the ancestry/descent and carry out paternity testing. 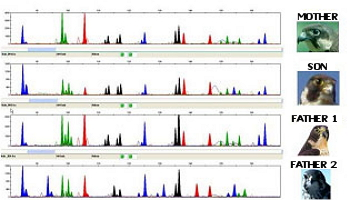 Contrast of the genetic profile of a child against two possible parents. 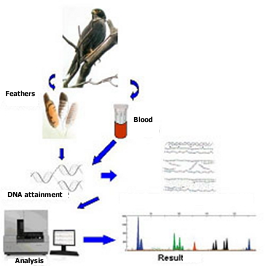 Schematic representation of the methodology used for genetic identification.

The microsatellite analysis is a simple, fast and low cost technique that can be performed from any sample containing  nucleated cells. The procedure is as follows: first we carry out a DNA isolation and next we perform an enzymatic amplification of the gene by the PCR technique. The analysis of these amplified fragments results to what is called DNA fingerprinting or genetic fingerprint, which is similar to a barcode being characteristic of each animal.

Due to the high polymorphism of the markers, there is a large number of possible combinations of alleles, which makes it difficult that two individuals have the same genetic fingerprint and therefore, it is possible tehir discrimination. It is a powerful and 'universal' method of identifying, valid throughout the  life  of the animal and unfalsifiable, so in case of  loss,  theft or dispute, it  could be unequivocally identified.

The genetic analysis of paternity testing, or genetic pedigree control in predatory, like in other animal species, are based on the contrast of genetic fingerprint of an animal with its ancestors or parents. For each marker, the 2 alleles that presents an individual, one has been inherited from the mother (in whose veracity, in many cases, there is no question) and the other from the biological or real father. In the case of AFLP, each existing band in the genetic fingerprint of an individual, it must be present in one of its two parents. If this analysis is made for a 12-14 set of markers, the power of paternity exclusion is very high, close to 100%. If the alleged father is rejected as the biological father, the result is categorical and absolute.

Determining the "genetic fingerprint" or "DNA fingerprinting" allows both identify animals by a universal highly polymorphic and unforgeable method, which lasts the lifetime of the animal, and verify or certify the ancestors or descents of animals by comparison with the genetic fingerprint of their parent or offspring.

The low necessary biological sample (just a drop of blood), the high polymorphism of these markers over other previously used, and ease of determining unequivocally, makes them techniques more and more routinely used for recording animals in herd books of different breeds, to verify your identity and ensure racial purity.

The ease, quickness of determination and low cost make it ideal for generalization in Autonomous Region that keep track of the native species bred in captivity, breeders, and individuals of different animals and technicians from SOIVRE that oversee the application of Royal Decree 1739/1997, on measures implemented by the Convention on international trade in endangered species of wild fauna and flora (CITES), done at Washington on March 3, 1973 and Council Regulation (EC) No 338/97 of 9th December 1996 on the protection of species of wild fauna and flora by regulating trade therein. 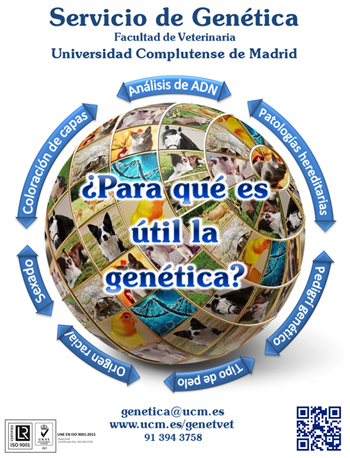 This technology has been developed by the Genetic Service of the Veterinary Medicine Faculty, Complutense University of Madrid, by a research group with an extensive participation in national and European research projects that have allowed them to develop the methodologies needed for this offer.

This center has been offering its services since 1996. Since its launch, the demand for genetic identification and parentage controls have emerged both individuals and institutions, such as the Department of Environment of the Community of Madrid, of Castilla y León, CITES or SEPRONA, indicating the wide range of possibilities.

The technological basis of this Genetic Service is supported by research that the authors have conducted over the past 20 years and spread through numerous scientific publications in relevant journals, counting also with extensive experience in collaborations with companies and associations. They are part of the group "Animal Nutrigenomics" of the Animal Production Department, Faculty of Veterinary Medicine of the UCM, directed by Susana Dunner. This research group is included in the cluster of Agri-food and Health of the International Excellence Campus (CEI-Moncloa).