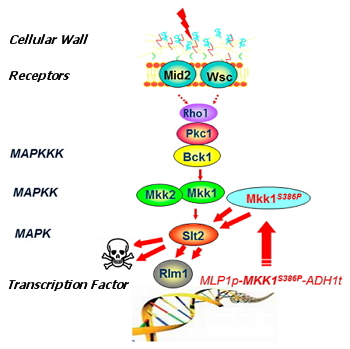 Figure 1. Diagram illustrating how the genetic amplification and feedback circuit of the CWI route mediated by MAPK Slt2 in S. cerevisiae operates. The different components involved in this pathway, which response to stress on the cell wall, and the composition of the gene construct of the invention are shown.

It has been developed a gene construct with genes from Saccharomyces cerevisiae, which can detect antifungal and antitumor compounds, by virtue of its capacity to alter the cell wall of fungi or inhibiting components involved in signaling through the route of MAPKs responsible for maintaining Cell Wall Integrity (CWI).

The gene construct includes the MKK1 gene of Saccharomyces cerevisiae in which a point mutation results in a change in the amino acid 386 of the protein (serine to proline), creating a hyperactive form of the protein (MKK1S386P). This gene is regulated by the promoter of an inducible gene transcription factor Rlm1 from the route of cell integrity (activated by attacks to the cell wall), specifically the pYKL161C (MLP1) gene (having high transcriptional induction in response of a wall damage and stimuli that activate the CWI) and the path termination sequence ADH1 gene transcription (Figure 1).

Such gene construct amplifies the response to signals that activate the cell integrity path, even if they are weak, and involve the creation of a positive feedback circuit which stimulation leads to cell death. By inducing lethality, this tool allows an easy tuning of compound tracking systems in a simple, specific, sensitive and easy way to manipulate.

The technology fits within the biotech-pharmaceutical industry, within drug screening programs for finding compounds with antifungal activity or modifying activity of the signal mediated by MAPKs or anti-tumor.

This technology is protected by a national patent (ES2530292B2), granted with prior examination, and it has been applied for international extension (PCT/ES 2015/000166).

The gene construct can be incorporated into a vector or into the genome of S. cerevisiae. On the transformants that carry the gene construct could be performed assays for detecting compounds with antifungal or antitumor activity. If these substances stimulate cell integrity pathway, an activation of the kinase cascade Slt2 will occur. It will originate the phosphorylation and activation of Rml1, of YKL161C promoter induction and the expression of hyperactive allele (Figure 1). An amplification circuit with positive feedback will be generated as long as the stimulus is maintained, leading to an excessive response resulting in cell death at low concentrations of any agent that alters the cell wall (Figure 2). This gives the gene construct a hypersensitivity to stimuli that activate the CWI route.

The system can be used to identify the following compounds:

Figure 2. Illustrative photographs of growth inhibition caused in S. cerevisiae by a disc impregnated of Congo red in wild cells with and without the genetic circuit of signal amplification.

They can be identified compounds that alter cell wall processes or directly damaging the structure. These compounds stimulate the amplification circuit route CWI causing cell death. They could be detected by tracking systems HTS (High Throughput Screening). The strain containing the gene construct will be hypersensitive to damage the cell wall and, thanks to this, you can discover new compounds that are active on this target even if they are at low concentrations or have a reduced power in the test sample.

They can also be identified compounds that inhibit components of the CWI route, preventing the compensatory mechanism, which is activated under conditions of damage in the cell wall, to be discharged, thereby maintaining the integrity of this essential structure. In combination therapies, these compounds could enhance the action of other antifungal drugs that act on the cell wall. These compounds would be identified by their ability to prevent cell death of fungal strains that have the gene construct of the invention, in conditions of activation of the amplification circuit by any known stimulus CWI route. As the form of identification is by tracking cell viability recovery, it is favored the isolation of compounds with low toxicity to eukaryotic cell by itself.

This technology provides a very simple and economical management tool for companies looking antifungal or antitumor compounds. First, regarding antifungals, this gene construct can detect compounds that target the cell wall of fungi, target on which there are not yet many commercial antifungals, target against which have not appeared a large number of resistances, what has occurred to other antifungal acting on other targets. As a structure that is not present in human cells, they could find antifungals with fewer side or adverse effects. Furthermore, the construct is highly sensitive due to the amplification of the response, being capable of detect compounds with antifungal properties even at very low concentrations.

Regarding compounds with antitumor activity, the gene construct may have its second application field due to the similarities of MAPKs with other eukaryotic organisms, including higher organisms. Therefore, compounds identified as inhibitors of MAPKs in yeast homologues may also act on components present in mammalian cells. »Patent

This gene construct has been developed by the research group "Signal transduction in Saccharomyces cerevisiae" within the Department of Microbiology II of the Faculty of Pharmacy of the UCM, whose objective is the study of MAPK pathways in yeast, mainly the route of the Cell Wall Integrity (CWI).

The group also works in other lines of research:

The gene construct is protected by a national patent (ES2530292B2), granted with prior examination and it has been applied for international extension (PCT/ES 2015/000166). The research group is interested in contacting companies who wish to acquire an operating license of the patent or in collaborating to continue and expand their research.