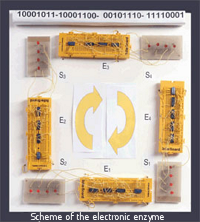 Digital electronic circuit that emulates the function and configuration of the active site of a biological catalyst or enzyme, characterized in that it is configured by a procedure which is an unconventional genetic algorithm, selecting the electronic gates and the states of the slide switches that compose it. 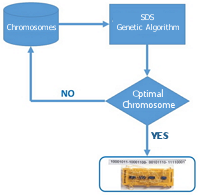 The transformation of an input signal into an output signal, both previously established by the user of the device, requires the configuration of the active site that simulates the electronic circuit.

The coupling of the electronic enzymes may be linear or ring-based, admitting other possible couplings for the transformation of digital signals into batches, one after another, in the predetermined sense. Graphical representation of the operation.

The device and the configuration procedure are characterized by the economy of the components, the efficiency of the input signal recognition system and the reconfigurable character of the device by the SDS algorithm, emulating an enzyme whose active site evolves as a function of input / output signals.

The recognition of digital signals based on the use of electronic enzymes has utility in the intelligent recognition of train cars, machinery in an assembly line, and in general in those practical situations where a set of elements are combined or ordered with the target to perform a certain task.

This technology has been developed in the Laboratory of Bioinformatics of the Department of Applied Mathematics (Biomathematics) of the Faculty of Biological Sciences.

This technology has been developed in the Laboratory of Bioinformatics of the Department of Applied Mathematics (Biomathematics) of the Faculty of CC. Biological. Since the early 90's this laboratory has accumulated a long experience in:

2. Design and development of expert systems for decision-making, consulting and diagnostic problems.

3. Systems of recognition and classification of patterns or signals applying artificial neural networks.

Among other projects, our group participated in 1995 with the University of Málaga in a research project on the design of handsets with ergonomic properties applying genetic algorithms, funded by ALCATEL-CITESA. At the beginning of 2000 we began a line of research in which we apply genetic algorithms to molecular automata implemented at the hardware level, in particular electronic enzymes, studying its possible practical application. Result of this work is the patent whose technology is described in this technological sheet [1, 2]. In 2012 the group carries out a consultancy on computational procedures bioinspirados according to contract Art. 83 between the Universidad Complutense and the company Kincubator S.L.

In 2004 he was awarded the "II Ideas Contest for Spin-Off Researchers" organized by the Ministry of Education of the Community of Madrid; In 2007 he is awarded the "II Competition of Ideas and New Companies of Technology Base of the UCM" and in 2013 he is awarded as a finalist in the "II Edition of the Entrepreneurial Laboratory Program" of the Madrid Science Park.

This research group can provide the following services:

• Advice and consultancy on specific optimization problems in which a metaheuristic methodology is required.

• Collaboration, study, design and development on possible technological solutions by applying one of the five methodologies described in the previous section.