Early Earthquake Early Warning Systems (EEWS) are alarm systems in the event of a destructive earthquake. They are based on the fact that in the first seconds of the P wave (the first one generated by the earthquake and traveling at greater speed) there is enough information to calculate its size and destructive capacity, so that an alert can be given before the arrival of the most destructive waves (the S) to a location more distant. The time available to give the alert can range from tens of seconds to a few minutes and allows decisions to be made (Figure 1) to mitigate damage caused by the earthquake (eg self-protection measures, slowing down high speed trains or stop certain industrial processes, cut off gas supply, alert hospitals, prevent aircraft take off or landing, etc.) 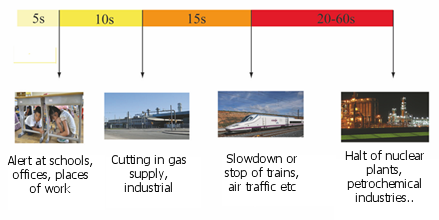 Earthquakes are natural phenomena that cannot be predicted or avoided and, therefore, the challenge is to get society ready to deal with them, mitigating and minimizing their damage. Early Seismic Warning Systems (EEWS) are one of the newest tools developed in the last decade to achieve this goal and that more excitement has awakened. The effectiveness of these systems has been verified with the occurrence of the great earthquake of Japan of March 2011, which has increased the interest for these systems.

The basic hypothesis used by EEWS is that the first seconds of the P-wave record, the first wave generated by the earthquake, there is enough information to determine its size. This is the main difference with the classical systems, which expect to have the complete record of the earthquake to calculate its magnitude, and hence its destructive capacity. If the earthquake (seismogram) at a station near the focus is transmitted in real time to the data processing center, via internet, satellite, telephone, etc., the information travels at the speed of light (300,000 km / s) and therefore faster than the seismic waves that propagate at a speed of 6km / s P waves and about 4 km / s the shear and surface, the most destructive. These first seconds of signal are processed in the data center and the SAST is able to estimate the parameters of the alert (Figure 2). If these exceed a threshold value, the EEWS automatically generates an alert. One factor to consider in an EEWS is the size of the blind zone, this is the area around the epicenter where the alert cannot be given. For an EEWS to be effective the blind area must be as small as possible or not include the sites to be protected. The time that is available to give the alert depends on the distance between the station that registers the earthquake and the site to be protected. The first step, before implementing EEWS in a region is to study the feasibility of the same.

Figure 2. Scheme of aN EEWS. The star represents the epicenter, the cylinders of the seismic stations (in green the wave has already arrived). Also shown is a seismogram and time window used (modified by Carranza, 2016).

The research team that has developed this technology, is formed by members of the Department of Earth Physics, Astronomy and Astrophysics I, Faculty of Physical Sciences of the Complutense University (project coordinator), together with the Royal Institute and Observatory of The Armada de San Fernando (Cadiz) and the Institut Cartografic i Geologic de Catalunya (Barcelona). The objective of the research has been to obtain empirical correlations between parameters of the earthquake alert and magnitude and the development of a prototype EEWS.

The seismicity, seismotectonic and seismic risk research group of the UCM offers its experience and knowledge for studies of seismicity (historical and instrumental), damage assessment, intensity estimation, focal mechanism of earthquakes (point and extensive source), Studies of directivity, determination of the regional effort, seismotectonic models and processes of earthquake rupture.