Research in the chitina/chitosans system Research Group has been working for years with chemical-physicalcharacterization of this family of biopolymers (Chitosans) and especially with its applications to pharmacy, cosmetics and food. Waste of food industry is the raw material from which high value ingredients are designed and created. The eventual products become very competitive as they own such properties as anti-microbial, anti-fat, emulsifier or moisturizing.

We have designed and developed products such as: 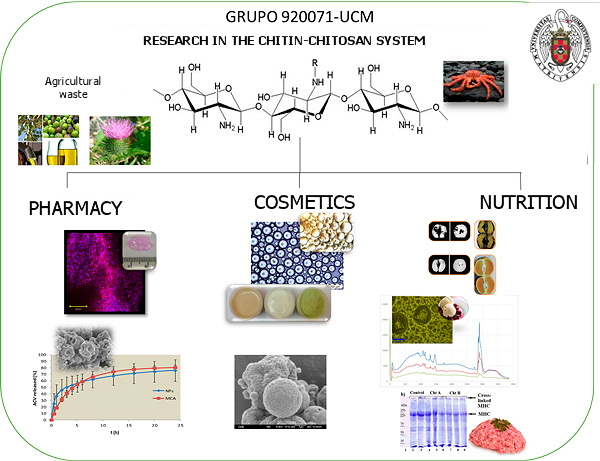 Scheme of technological offer of the group Investigations in the chitin chitosan system.

After an initialelection and physical-chemicalcharacterization of the specific Chitosan, some bioactive compounds are encapsulated to allow its conservation and stability during storage and its controlled release in time. Techniques of coacervation, ionotropic gelatification and moisturizing-atomization are used when necessary.

In surgery, Chitosan is very useful to repair damaged tissues through bioactive hydro-gels or creams. It is also very efficient to cure wounds, burns and ulcers as it facilitates scar formation.

In Food, its anti-microbial, anti-oxidant character and its filminess makes it a natural preservative against pathogens. It contributes also to the stability of meat as it slows down oxidative processes.

Due to its exceptional biological properties, able to reduce cholesterol in blood and to catch fat, it becomes a functional ingredient besides a technological one.

At the Chitin/Chitosan system Research Group number 92007, in the Chemical Physics Department, at the Faculty of Pharmacy, UCM. More details are included in the C.V. of its members.