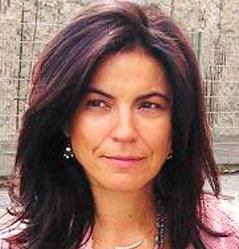 Dr. Isabel Durán Giménez-Rico is Professor of North American Literature and was Vice-Provost for International Affairs at the ComplutenseUniversity from 2015 to 2019. She was President of SAAS (Spanish Association for American Studies) until 2019 and Chair of the Department of English Philology II (2013-2015). She was also Vice-Dean of Students at the Faculty of Philology of the UCM (2006-2010) and coordinator of the Humanities area of the UCM Summer Courses at El Escorial. She has been an elected member of the General Council of ASA (American Studies Association 2008-2011) and is currently a member of the International Committee of that association.

Her research and publication record on gender studies, literature, autobiography and ethnicity include the edition of an eight-volume Gender Studies collection (the last one being the bilingual Estudios De Género: Visiones Transatlánticas / Gender Studies: Transatlantic Visions, 2016), and the book A Critical Gaze from the Old World: Transatlantic Perspectives on American Studies (London: Peter Lang, 2018), in addition to more than sixty articles. Her most recent publications include: "Transnationalism, Autobiography and Criticism: the Spaces of Women's Imagination" (The Routledge Companion to Transnational American Studies. Routledge, 2019: 202-2013); "Between Molds and Models: Female identities in Almudena Grandes and Roberta Fernández" (Symbolism 17, 2017: 143-167) or "Latina/o Life Writing: Autobiography, Memoir, Testimonio" (The Cambridge Companion to Latina/o American Literature. Cambridge UP, 2016: 147-160).

Isabel Durán is the Director of the Complutense Research Group "Estudios de género en el ámbito de los países de habla Inglesa" (Gender Studies in the anglophone World). She has supervised 12 Doctoral dissertations. She has been a researcher at HarvardUniversity through the Real Colegio Complutense (2012) and a Fulbright scholar (2000). She has lectured at various Spanish universities and institutions, as well as at the Universities of Bielefeld (Germany), Olomouc (Czech Republic), Aarhus and Copenhagen (Denmark), and at the North American universities of Harvard, Riverside, San Diego, Santa Barbara, UCLA, Dartmouth College and Georgia State. She is currently part of a European research team on Gender and Aging Studies.