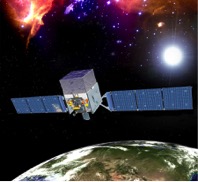 The Large Area Telescope (LAT) is the principal scientific instrument on the Fermi Gamma Ray Space Telescope spacecraft. The Fermi spacecraft was launched into a near-earth orbit on 11 June 2008. The LAT is an imaging high-energy gamma-ray telescope covering the energy range from about 20 MeV to more than 300 GeV. Such gamma rays are emitted only in the most extreme conditions, by particles moving very nearly at the speed of light. The LAT's field of view covers about 20% of the sky at any time, and it scans continuously, covering the whole sky every three hours.

Members of the High Energy Physics group participate in Fermi-LAT. Their activities focused on the scientific exploitation of this instrument, in particular the study of AGNs, evolution of galaxies and Cosmology.