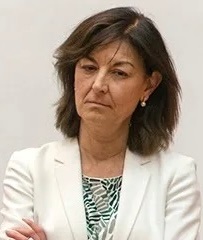 Araceli Manjón-Cabeza is professor of Criminal Law at the Complutense University of Madrid and at the Institute of Comparative Law of the UCM and the Demospaz Institute of the Autonomous University of Madrid. She has been Chief Inspector of the Inspection of Services, Secretary General and Director of Department. Since 2013 she has directed the UCM Extraordinary Chair "Drogas Siglo XXI".

Assistant, on behalf of the Spanish Government, at United Nations meetings on drug control matters or accompanying foreign Governments. Expert of the Conference of Ministers of Justice of Ibero-America, participating in the drafting of criminal harmonization instruments for Central America and the Criminal Code of Honduras and Evaluator within the monitoring process of the cannabis law of Uruguay.