This line is dedicated to the study of the chemical activity of modified surfaces, from simple metals to binary oxides, ranging from UHV to ambient conditions.

Among the most recurrent topics in Surface Science is the identification of active sites for a given catalytic reaction.

In this research line we have employed a combination of infrared and electron spectroscopies to probe surface species after the adsorption and further evolution of methanol on Ru(0001). Two are the principal contributions of this work to the rather extensive literature on that system. On the one side, the research described in the publications shown below has been conducted under conditions which intend to replicate those existing in real catalysts. Starting with pressures in the ultrahigh vacuum range, continuous exposures at increasing pressures up to 10-2 mbar have been carried out. The surfaces have been subjected to exposures as long as 107 L and a state practically corresponding to saturation under those conditions has been reached and investigated. For much the same reason, the temperature has been maintained around 300 K. On the other side, the behavior of flat surfaces (with a low density of surface steps) has been compared to that of modified surfaces in which a high density of surface steps has been introduced in a controlled way and the role of these defects in activating new reactions paths investigated. Furthermore, a set of experiments has been performed in which the Ruthenium surface has been exposed to oxygen co-adsorbed with methanol and the results analyzed in terms of the corresponding chemical modification of the Ruthenium surface. One of the most interesting results is that formate (HCOO) is catalyzed at surface defects (steps). This is an example of the identification of an active site for a given surface reaction.

This work is related to a very hot topic which lies in the borderline between Surface Science and Catalysis: the oxidation of CO on Ruthenium surfaces. Some groups have recently addressed the fact that the high activity observed under reaction conditions are associated to the role played by active oxygen located at surface steps on metallic Ruthenium.

Which is the role of surface defects in the interaction of water with TiO2? Is a defective surface more or less hydrophilic? These types of questions are addressed in this research line, trying to separate between the chemical and structural contributions of modified rutile TiO2(110) surface to its interaction with water.

Usually, a relatively direct relationship has been invoked in the literature between surface defects in TiO2(110) and water adsorption: the existence of defects enhances hydrophilicity. The usual argument is that surface defects, created wither by UV irradiation or ion bombardment, are mainly O-bridge vacancies, which in the presence of water dissociate it leaving a hydroxyl group, which in turn make the surface polar which in turn enhances the further adsorption of water. But this argument, does it hold under a very high density of surface defects, where other types of defects are present (and not just O-bridge)? Does it hold under a huge structural disorder at the nanoscale, where other types of effects must be considered?

Some more recent info about this research line can be found here. 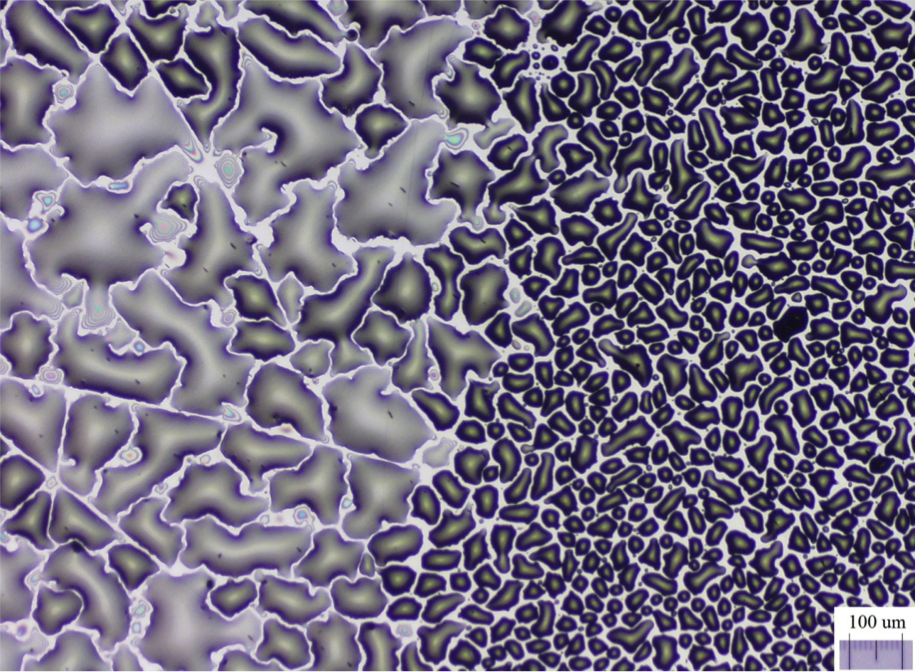 Optical microscopy image of the TiO2(110) surface after exposure to water vapour and further condensation. The region on the left is the pristine surface, while the one on the right corresponds to the modified part of the surface.

Iron oxides exhibit very different properties, depending on their phase, temperature, stoichiometry... In this line we study the chemical activity of ultrathin FeO films. 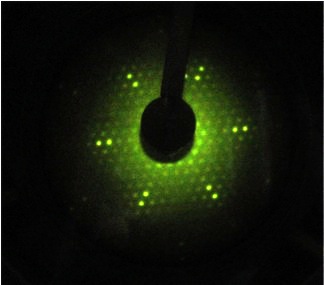 LEED pattern of a FeO ultrathin film grown on Ru(0001).