Due to its unique properties, graphene has attracted the interest of a broad range of disciplines. Graphene presents high electrical and thermal conductivity, great mechanical strength and has a large surface area. In particular, graphene functionalized with photo-or electroactive units remarkably sustains and expands the graphene boom. The rise of graphene in photonics and optoelectronics is evidenced in topics ranging from photodetectors, photovoltaics, and optoelectronics to photocatalysis.
In this regard and on the way to ultraflat single-molecular junctions with transparent electrodes, our research group present a fabrication scheme based on epitaxial graphene nanoelectrodes. As a suitable molecule, we identified a molecular wire with fullerene anchor groups. With these two components, stable electrical characteristics could be recorded.1

We are also interested in chemical approaches toward the preparation of high-quality graphene flakes,which encompass the use of graphite as initial material, and their interaction with redox or optically active materials.2 We have engaged in the chemical modification of pristine graphene according to three general avenues, namely (i) covalent chemistry,3 (ii) supramolecular chemistry4 and (iii) graphene on solid surfaces.5
Using the covalen approach we have prepared an all carbon hibrid nanostructure. A versatile [60]fullerene-benzyne building block has been anchor to exfoliated graphene by means of a chemical cycloaddition reaction. It should be notice that Theoretical calculations demonstrate the [4+2] cycloadducts to be the more stable configuration to be formed, although the formation of the [2+2] products cannot be ruled out based on the small difference in energy. 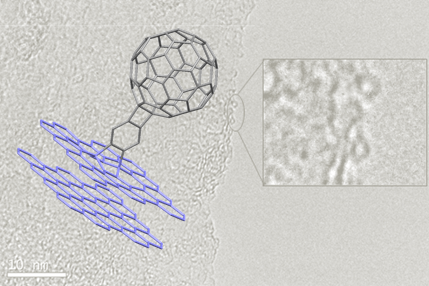 With regards to the supramolecular modification of graphene, the interaction of this 2D carbon material with surfactants or planar aromatic moieties has been described. However, we have demonstrated the noncovalent modification of this material with a nonplanar recognition motif, namely п-extended tetrathiafulvalene, exTTF. It should be highlight that a single unit of exTTF does not produce detectable interactions with graphene, so we decided to employ a multivalent approach to amplify it, in which gold nanoparticles would serve as a scaffold to present multiple units of exTTF to the surface of graphene. In this context our findings expand the number of possible recognition motifs for graphene to a great extend.

Besides the covalent and non-covalent modification of graphene we have also studied, in collaboration with Prof Rodolfo Miranda of IMDEA nanoscience, graphene grown on solid surfaces.
We used two different electron acceptors molecules to dope graphene with holes namely 7,7,8,8-tetracyano-p-quinodimethane (TCNQ) and 2,3,5,6-tetrafluoro-7,7,8,8-tetracyano-p-quinodimethane (F4-TCNQ). Interestingly, a single monolayer of graphene epitaxially grown on Ir(111) electronically decouples adsorbed molecules from the metallic substrate and allows the study of their 2D self-organization. The molecular ordering of TCNQ (7,7,8,8-tetracyano-p-quinodimethane) molecules on graphene is dominated by intermolecular attractive interactions, which results in the formation of a compact monolayer. STM imaging of HOMO and LUMO orbitals indicates that they are almost identical to the calculated orbitals for a free molecule, indicating little charge transfer to the graphene overlayer. The presence of the four fluorine atoms in F4TCNQ results in more repulsive interactions and, therefore, a less compact arrangement with molecules freely rotating at specific adsorption sites is observed. 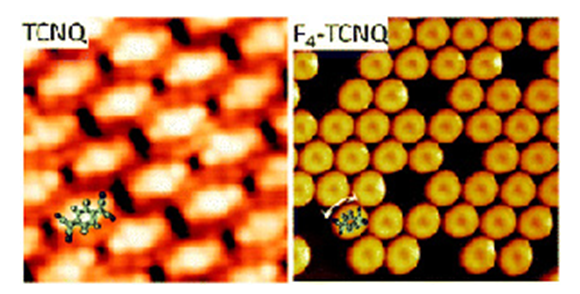 The intermolecular interaction, attractive for TCNQ and repulsive for F4-TCNQ, dictating the molecular ordering on epitaxial graphene grown on Ir (111).

In a more recent study, we go an step further and observes that each isolated molecule of TCNQ deposited on graphene epitaxially grown on Ru(0001) acquires charge from graphene, developing a localized magnetic moment and showing a prominent Kondo resonance. The magnetic moment survives even when the molecules form into a dimer or a monolayer. Thus, a magnetically ordered, 2D organic layer has been created by charge donation from graphene/Ru(0001) to the strong acceptor TCNQ (very much akin to charge-transfer complexes).This observation of long-range magnetic order in an organic layer adsorved on graphene paves the way for incorporating magnetic functionalities into graphene. 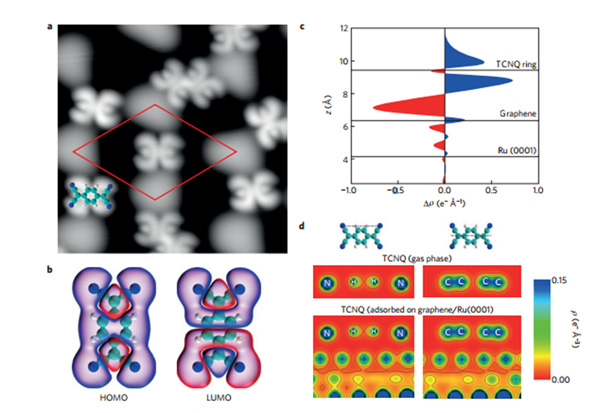 In a recent reseach we become interested in graphene quantum dots. This material is formed of a few layers of graphene of a size less than 30 nm. Due to its exceptional properties such as low toxicity, stable photoluminescence, chemical stability and pronounced quantum confinement effect, GQDs are considered as a novel material for biological, opto-electronics, energy and environmental applications. We have sinthetised the first chiral graphene quantum dots by acidic exfoliation and oxidation of graphite, with enantiomerically pure (R) or (S)-2-phenyl-1-propanol.6

The aim of our group is to produce new molecules of interest in different areas of Nanoscience. In particular, we are developing photo- and electro-active molecules for the coating of metallic surfaces in the search of a control on the final morphology of the material, since the precise nanometer-scale organization of complementary electroactive materials is a key prerequisite to improve the performance of optoelectronic devices. Our work in collaboration with the group of Prof. Rodolfo Miranda (IMDEA-Nanoscience) illustrates, considering Ultrahigh High Vacuum (UHV) STM experiments, the high organization degree exhibited by mixtures of exTTF7and the fullerene derivative PCBM8 on Au(111).9 The mixtures rearrange into a lateral organization of interdigitated stripes with characteristic widths of 10-20 nm, a morphology that has been predicted to optimize the efficiency of organic solar cells.10

STM images on Au(111) of the organization of exTTF at the nanometer-scale.

In addition, progress in organic electronics requires a detailed understanding of all the relevant chemical and physical processes that occur at organic-film/metal interfaces. In this sense, the electron transfer at the interface between a Cu(100) metal surface and the organic electron acceptor tetracyano-p-quinodimethane (TCNQ) leads to substantial structural rearrangements on both the organic and metallic sides of the interface.11 More interestingly, TCNQ derivatives adsorbed on a metal surface undergo a self-limited, non-observed in solution, decyanation reaction that only affects two out of the four cyano groups in the molecule.12