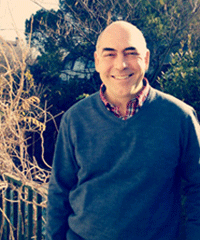 Ángel Martín Domenech was born in Madrid, Spain. He graduated in Chemistry at the Universidad Complutense de Madrid (UCM-1986). In the same year he obtained the Master in Organic Chemistry under the supervision of Prof. J. Plumet working on the chemistry of N-acyl-b-lactams. Afterwards, he worked seven months in Milano (Italia) in the Research and Development Department of the Multinational Suisse Company (SICPA, S.A.). He returned to the UCM and received his Ph. D. under the supervision of Prof. J. Plumet and Prof. O. Arjona. Following one year postdoctoral stay with Professor María J. Camarasa (Instituto de Química Médica del Consejo Superior de Investigaciones Científicas) working on the search for effective drugs for AIDS therapy, particularly focussed on the viral enzyme reverse transcriptase (RT) that has a critical role in the life cycle of the human immunodeficiency virus type 1 (HIV-1), he joined Professor N. Martín´s group at UCM. From 2010, he holds an Associate Professor position at the Department of Organic Chemistry of UCM University. His current research interest focuses on the reactivity of fullerenes with transition metal, and the application of the new derivatives in materials science.