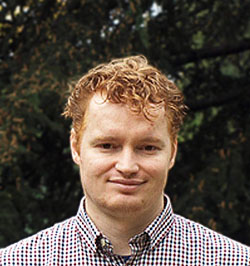 Pieter Naaijkens is a mathematical physicist working as a Lecturer in Mathematical Physics in the School of Mathematics at Cardiff University. Before that he was a postdoc working on the GAPS project of David Pérez García at Universidad Complutense de Madrid.

After obtaining a double degree in mathematics and theoretical physics at Utrecht University in 2007, he went on to do a PhD in mathematical physics at Radboud University Nijmegen, under supervision of Michael Müger and Klaas Landsman. From 2012 to 2015 he was a postdoc at Leibniz University Hannover, of which two years were funded by a Rubicon fellowship of the Dutch Orgnisiation for Scientific Research (NWO). Supported by a Marie Skłodowska-Curie fellowship of the European Union, he continued his work at the University of California, Davis for two years, returning in 2017 to RWTH Aachen University in Germany for a year, before ending up in Madrid. In 2017, with his co-authors Sven Bachmann and Wojciech Dybalski, he has been awarded the Annales Henri Poincaré Prize 2016.

His scientific interests lie in the use of operator algebraic techniques to study quantum systems with infinitely many degrees of freedom. The focus is on many-body quantum spin systems with topological order. Such systems are of central interest not only because they offer new and exciting physics, but also because of their potential applications in building a robust quantum computer. In addition, it turns out that the operator algebraic methods used to study such systems can be applied to study pure quantum information tasks, such as calculating the capacity of a quantum channel.