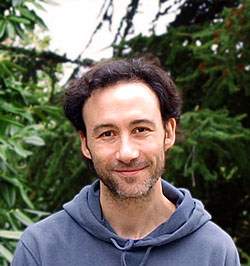 Carlos Palazuelos was born in Madrid (Spain) in 1979. He obtained a PhD in Mathematics at Universidad Complutense de Madrid in 2009. He spent one year (2010) at the University of Illinois at Urbana-Champaign as a visiting assistant professor. In 2011 we joined the CSIC-ICMAT with a Juan de la Cierva contract. From December 2013 on, he enjoys a Ramon y Cajal contract at Universidad Complutense de Madrid-ICMAT.

The main topics of his research are functional analysis and quantum information theory. Most of his work is focused on the study of Banach/operator spaces and its applications to quantum information theory; in particular to the theory of Bell inequalities, quantum entanglement and quantum channels. Part of this work is very closely related to certain problems in the field of operator algebras. Some of the works in this line can be found in Communications in Mathematical Physics, Advances in Mathematics, Physical Review Letters and Computational Complexity. Another important research line of Carlos’ work is noncommutative Harmonic Analysis. More precisely, some of his recent works are about hypercontractivity in von Neumann algebras. Some works in this line have been published in Annales Scientifiques de l'École Normale Supérieure and Memoirs of American Mathematical Society.