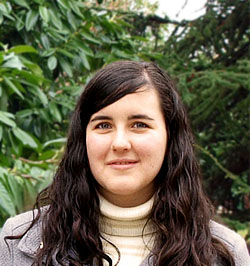 I was born in 1992 in Linares, Spain. In 2009, I started my Mathematics degree at UGR (Universidad de Granada), and I finished it in 2014. In 2010, I started a Physics degree at the same university, and I am currently finishing it at UNED. I had my first contact with research during the summer between the fourth and fifth year of my Mathematics degree, when I obtained a ‘JAE-Intro CP’ scholarship to study at ICMAT, for two months, some topics related to complex geometry, under the supervision of Luis Álvarez Cónsul. During the following year, I benefited from a ‘Beca de Colaboración’ to study some topics about general relativity under the supervision of Bert Janssen (UGR).

In 2014, I moved to Madrid to study the Master in Mathematics and Applications at UAM (Universidad Autónoma de Madrid). In September of 2015, I presented my Master Thesis, ‘Norm-attaining operators’, which was written under the supervision of Miguel Martín (UGR) and José Pedro Moreno (UAM), and dealt with the problem of the density of the set of norm-attaining operators between two Banach spaces in the set of bounded linear operators between the same spaces.

I am a member of ICMAT since September, 2015, supported by a four year fellowship from "la Caixa-Severo Ochoa international Ph.D. program". I am currently working in my Ph.D under the supervision of David Pérez García. My general research line lies in the interactions between quantum information theory and quantum many-body physics. More specifically, my thesis focuses on characterizing the velocity of convergence of the dissipative evolution of an open quantum many-body system to its thermal state.