ANALYSIS OF THE TRANSMISSION OF COAT COLOR GENES IN HORSES

The color of a horse greatly influences the value of the specimen. Three major genes control the coat color: Gray (G> g), Extension (E> e) and Asip (A> a). The basic coats originate:

In addition, there are other genes that dilute the basic coat colors, some of these are: 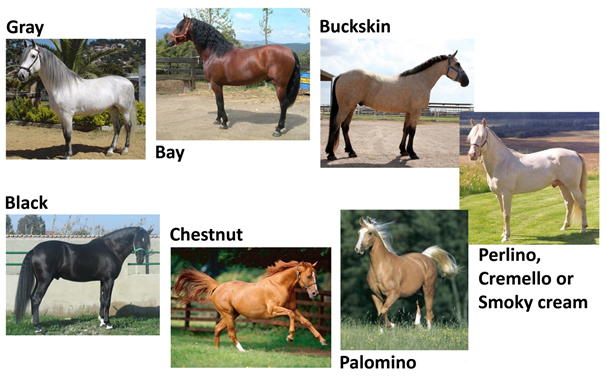 The most common horse coats colors

The genetic constitution of horses can be ascertained by two complementary methods:

1. Genealogical study. Knowing the parent's ancestors, descendants and siblings of a specimen, it is sometimes possible to deduce its complete genetic makeup and to predict the probability of the transmission of the coats to their offspring, provided that the genetic constitution of the specimen to which it is crossed is also known.

2. Molecular study. Sometimes, especially when dealing with grey horses, as is often the case in the Spanish Purebred (PRE), genealogical study is not enough and it is necessary to apply molecular tests to distinguish genetic variants. This is accomplished by specific PCR amplifications for each gene, using blood or hair as biological samples. Thus, for example, it is possible to know if a grey horse is EE, Ee or ee, in the last two cases, being able to give chestnut descent. You can also tell if a bay horse can give black offspring, if it is Aa and not AA. In the same way, it is possible to find out if a grey horse carries the variant CCr, and could give buckskin or even perlino offspring. The genetic constitution or genotype of an animal does not vary throughout its life, reason why, once known, it is no longer necessary to carry out further analysis of that specimen. This analysis allows to determine the probability of obtaining foals having a particular coat color, depending on the genotyype of the partners the specimen it is crossed to.

The equine genetics team of the Genetics Department of the Faculty of Biology of the Universidad Complutense de Madrid carries out genealogical studies and has developed molecular techniques to detect the specific variants for these genes carried by a specimen. The combination of the genealogical and molecular data allows to determine the genotype of the individuals for the genes controlling the coat color and to predict the coat of the progeny in the crossings in which they intervene.

Genealogical analysis are done from the stud database. Molecular analyses are performed from samples of about 30 hairs extracted with their bulbs from the mane or the tail (a simple instruction leaflet is sent to those interested).

If an owner already knows the genotype of their specimens and wants to know the probability of transmitting the coat in one or several crosses, simply sending the genetic formulas of the animals will make a transmission probability report, which will have a reduced cost, since it does not require molecular analysis.

The equine genetics group of the Genetics Department of the Faculty of Biology of the UCM has developed molecular protocols to accurately determine the genotype of horses for the Gray, Extension, Asip, Cream, Pearl and Champagne genes. This set of techniques makes the prediction of the probability of transmission of coat color much more reliable and helps to design the crosses to be made when a breeder is interested in obtaining offspring with a specific coat.

The sampling protocol has been optimized to the maximum to make it easy for users. For this reason a minimally invasive sample as hair, that does not require refrigeration and is sent by ordinary mail, is used.

The Equine Genetics group of the Genetics Department of the Faculty of Biology of the Complutense University of Madrid, is composed of two full time university professors, and various students. The group has extensive experience in this subject, having participated in two specific projects funded by horse genetics and published several scientific articles related to the subject in international journals such as: Theriogenology and Animal Genetics.

The technology has been developed in the laboratory itself, optimizing the protocols to achieve maximum effectiveness and reliability in the results. These results are included in a detailed technical report which also details the following aspects:

1. Genetic formulas of the individuals analyzed

2. For each individual: probability of transmission of the coats depending on each possible type of cross, so that once the genotype of the other parent is known, the probability of each coat in the offspring can be obtained.

In the video "HORSES OF COLORS, genetic diagnosis and transmission of coat color in the horse" you can observe the application of this technology.