The MULTINOT project aims at the creation of a parallel English-Spanish corpus which is balanced –in terms of register diversity and translation directions– and whose design and enrichment with multidimensional annotations focuses on quality rather than on quantity.

The project offers the scientific community a multifunctional resource which can be used by a variety of potential users and in a number of theoretical and applied contexts, such as, e.g.:

- translators in need of bilingual parallel texts in both directions

- translation trainers as a resource for computer-assisted translation

The MULTINOT corpus distinguishes itself from other parallel corpora by having a balanced composition (both in terms of registers and translation directions) and by focusing on quality rather than quantity. Thus, during the data collection phase, we made sure that the text samples were extracted from published online materials provided by publishing houses, press, government, corporate enterprises, European institutions, and other organisations under the ‘fair use’ agreement. Also, during data processing we also focused on corpus quality by manually correcting text samples at different processing stages such as sentence splitting, alignment and part-of-speech tagging. Furthermore, interannotator agreement has been carried out for the manual annotation phase of several higher level features, such as MODALITY, THEMATISATION, RHETORICAL STRUCTURES and PROJECTION.

The corpus currently contains the proportions of texts specified in table 1:

In addition, certain subregisters include manual annotation layers of semantic, pragmatic and discourse features, as follows:

In order to enable corpus users to query the corpus selecting the texts that fulfill their specific needs, each sample has an accompanying metadata file including text-related and translation-related information. The whole corpus is released in XML format, and made available through a password-protected online interface to be requested from the project"s principal investigator (Dr. Julia Lavid).

Financing body: Spanish Ministry of Economy and Competitiveness (MINECO) for the period: January 2013-Dec. 2015, with an extension until 31st December 2016.

MODALITY meanings and their realisations in English and Spanish

The MODALITY layer provides an analysis of the English original and translated texts, as well as of the Spanish original texts and their translations into Enlgish. The MODAL values which were used and their realisation features are graphically presented in Figure 1 below: 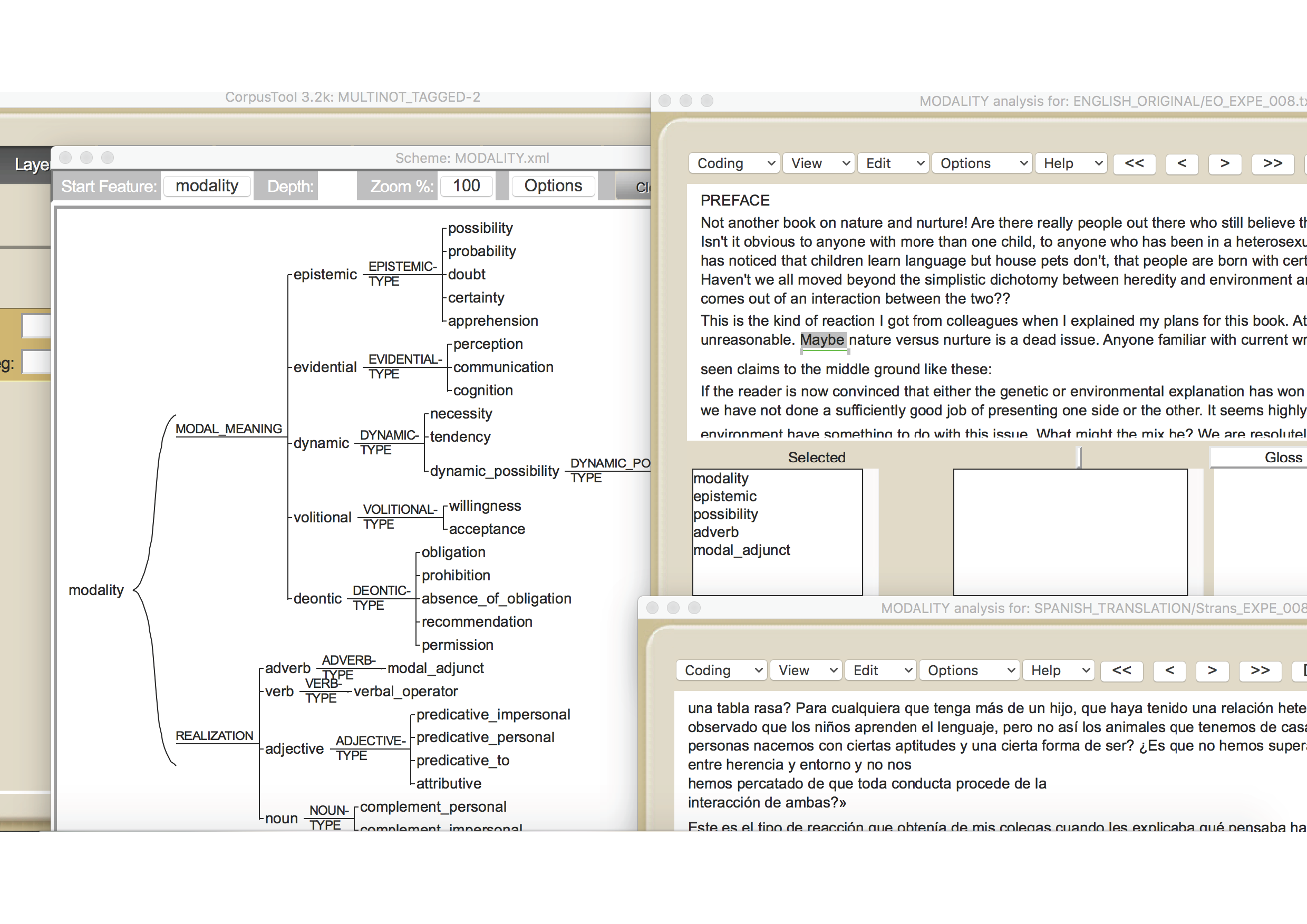 Go back to Projects